Marianne Williamson Is Way Out There, But She Won Tonight's Debate 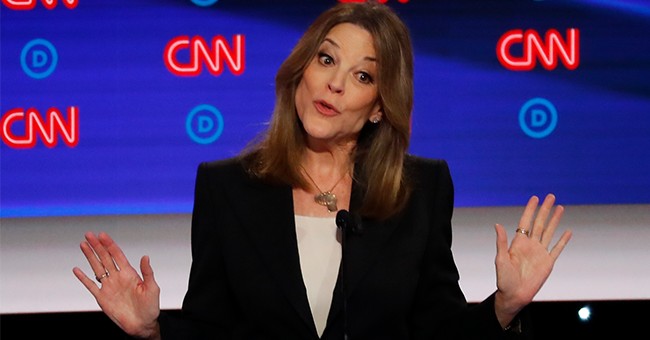 I’ll say it again, there is not a single candidate currently running that will beat Donald Trump in 2020. Not one. Unless someone steps up his or her game big league, Donald Trump is going to win a second term as president of the United States. Now, that being said, after tonight’s CNN Democratic debate, there had to have been a winner. I thought Sen. Bernie Sanders was one of them. He needed to be feisty, aggressive, and willing to attack. He did that, but he will need to destroy his best pal, Sen. Elizabeth Warren, to start a foundation from which he can reach the top of the 2020 field. It remains to be seen whether he’s willing to engage in that sort of campaign. Yet, that brings us to Marianne Williamson. She puts the “side” in the outsider. We’re in the era of the political outsider. And with Williamson, she’s way out there, but she also had the better moments of tonight’s debate, clinching some of the biggest applause lines, spikes in Google searches, and appeared to have what the others don’t: something new to offer.

Don’t get me wrong. There’s no way I’m voting for her, but her brand of politics shouldn’t be dismissed. She’s also feisty. And seemed to inject some energy into that CNN audience. Warren, Sanders, Klobuchar, Buttigieg, Ryan, Bullock, Hickenlooper, and Delaney all had the same politician-packaged lines, which came off as rather stale. There’s no life with this crop. None. And once again, the field showed that they’re nuts. We discussed nuclear weapons policy, which proved why the GOP is trusted more on national security issues, health care for illegals, open borders, gun control, and whether or not we’ll destroy private health insurance for millions of Americans now or later. The public option, an aspect of the original Obamacare legislation that was axed because it was viewed as a poison pill, was discussed as well. All of these are losing issues, so whoever is the nominee, especially someone who is viewed as being able to win back blue-collar Democrats—cough* Biden cough*–this agenda will not do that. If it's Biden in 2020, he'll be viewed as a Democrat with a working-class background promoting an agenda that mocks, denigrates, and targets…those with working-class backgrounds.

Everyone in America: Who is Marianne Williamson and why is she winning this debate?

Everyone in Montana: Who is this guy that claims to be our governor?!? pic.twitter.com/x0ayDRMF8H

Final tally: Elizabeth Warren and Bernie Sanders got the most speaking time during the Democratic debate https://t.co/goLnYVx9dS

Marianne Williamson just got the biggest applause of the night: pic.twitter.com/E33pOIYP2f

Video: Marianne Williamson again proving herself as a woman of the people with her use of "yadda, yadda, yadda" #DemDebate #DemocraticDebate pic.twitter.com/1jzAd32Kzx

Democratic presidential candidate Marianne Williamson says she has "some concern” that "Medicare for All" will make it difficult for Democrats to win in 2020. - CNN

Marianne Williamson: "In a way, the fact that people are so invested in creating this false narrative about me as the ‘crystal lady,’ ‘wacky new-age nutcase' -- if you really think about it, I must be doing something right that they’re so scared, don't you think?" pic.twitter.com/g1Arn0jCiH

In her opening statement, Marianne Williamson calls for Americans to "rise up" to defeat Donald Trump in 2020. https://t.co/QPrGh6lgl7 pic.twitter.com/8knngntjS8

People are gonna think that I’m trolling but compared to what else is up on this stage I think Marianne Williamson is actually winning this thing. This is amazing. No question she seems to be drawing the biggest applause of the night.

Former Michigan Governor Jennifer Granholm on 2020 candidate Marianne Williamson: “I know a lot of people like to mock her, but honestly she brought it” #DemDebate pic.twitter.com/D2l6qAGsC9

Marianne Williamson: "If you think any of this wonkiness is going to deal with this dark psychic force of the collectivized hatred that this president is bringing up in this country, then I'm afraid that the Democrats are going to see some very dark days." pic.twitter.com/KrLWqdOvcK

Williamson spoke for less than 10 minutes, but the fact that she is unique, different, and appears to see this election in a very, very different light, perhaps at the GOP’s peril, makes her stand out—and for the better. She will qualify for the fall slate of debates. And while she may be a bit…off, I think she actually did better in this debate than the previous one. Right now, I’m not so sure what’s going on. Is it that Williamson, who has peddled anti-vaxxer points, is genuine and has a certain quality that could make her a dark horse in the 2020 election or does she seem that way because the Democratic Party has devolved into outright insanity. Either way, the apparent anti-vaxxer is the one who spoke arguably more sense than most on the stage because liberal America has gone that far off the deep end. That’s a bit scary.