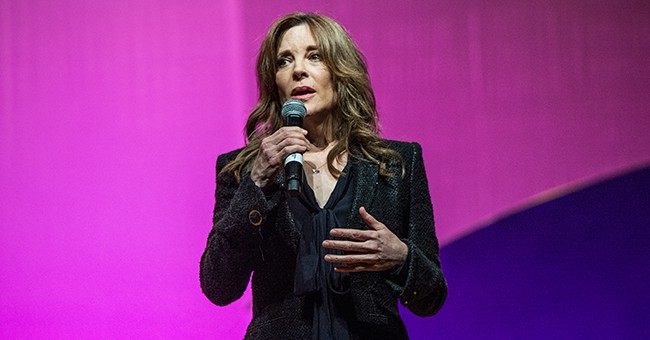 Who is Marianne Williamson? I mean I think she’s a national treasure. She captured the debate last night in terms of Google search because she gave one of the most bizarre performances in recent memory. She will tell off the New Zealand prime minister and harness missiles of love to defeat Donald Trump. She’s going to love him to death (via the Hill):

Author and activist Marianne Williamson (D) was the most-searched candidate during the second night of the first 2020 Democratic debates Thursday night, according to Google Trends.

“I’ll tell you one thing, it’s really nice if we’ve got all these plans, but if you think we’re going to beat Donald Trump by just having all these plans, you’ve got another thing coming,” Williamson told her fellow candidates. “Because he didn’t win by saying he had a plan. He won by simply saying 'Make America Great Again.' We’ve got to get deeper than just these superficial fixes, as important as they are.”

“[President Trump is] going to be beaten by somebody who has an idea what this man has done. ... You have harnessed fear for political purposes and only love can cast that out,” Williamson said later. “So I, sir, I have a feeling you know what you're doing. I'm going to harness love for political purposes. I will meet you on that field. And, sir, love will win.”

Williamson had the third-least speaking time during Thursday night’s debate, finishing ahead of only Rep. Eric Swalwell (D-Calif) and Yang.

That has to change, her position on the stage. She should be more front and center, preferably near Joe Biden. She wants to weaponize love, folks. So, please, Democrats—nominate Marianne Williamson in 2020; Donald Trump would certainly get a second term.

Okay—enough horseplay. The woman is sort of a whackjob. And now that everyone has searched her, we also know her past history of being an anti-vaxxer, which she conveniently backtracked prior to last night’s debate. Quite the timing there, huh? That’s quite the timing for that come to Jesus moment. Yet, it goes beyond that. From Williamson’s past tweets, which only further shows that she’s a gem and national treasure, it reinforced her past beliefs that medicine doesn’t cure disease, positive thinking does (via Daily Beast):

Williamson seemed to walk back her comments in a tweet last Friday morning, saying, “I understand that many vaccines are important and save lives,” and, “I recognize that there are epidemics around the world that are stopped by vaccines.”

But Williamson also noted, “I also understand some of the skepticism that abounds today about drugs which are rushed to market by Big Pharma.”

In fact, if you read the tweet closely, and if you know about Williamson’s 30-year career in the New Age world, two things become clear: first, she hasn’t backed down at all, and second, she’s been anti-science, anti-medicine, and anti-rationality for decades.

On The View, Williamson said, “I do not trust the propaganda on either side,” equating thousands of hours of scientific research with conspiracy theories hatched by ignoramuses. In a statement to The Daily Beast, she said that “public safety must be carefully balanced with the right of individuals to make their own decisions,” yet again misconstruing the public health risk of unvaccinated citizens.

The main point is: None of this is new for Williamson. For 30 years, she’s been peddling dangerous, anti-scientific garbage: specifically, the warmed-over “New Thought” teaching that you can manifest your own reality by thinking it to be so.

“The AIDS virus is not more powerful than God,” Williamson told a group of HIV positive disciples, according to a 1992 Los Angeles Times expose, written when Williamson was still in the early days of her fame.

For years, Williamson…and others told gay men that they could cure themselves if only they would properly visualize themselves getting well. Not just gay men, of course; people with cancer and other terminal illnesses, people struggling with obesity, people with chronic health conditions—to all of these, Williamson and her ilk said that they had the power to heal themselves, science be damned.

The results were predictable. Some people went off their medication, since taking medicine showed you didn’t really believe that you could cure yourself, and if you lack perfect faith, it’s not going to work. Some even died.

Yeah, that’s pretty insane. Buzzfeed’s Ellie Hall dug up some of these gems as well. Democratic voters, do your duty. Vote Marianne Williamson up and down the ballot.

And for the inimitable lady, I’m sure she’s visualizing herself sitting in the Oval Office. Through positive thinking, she will defeat Trump, except she won’t. Anti-vaxxers now have taken center stage. This is the Democratic Party in 2020, the party that’s supposedly pro-science. You guys wheeled in a crackpot on stage and didn’t even know it. If these clowns did, well, her candidacy would have lasted all but 30 seconds with all the ammunition here. Telling HIV-infected patients they can…cure themselves. Oh, we have a winner here.

Yin is feminine, earth; yang is masculine, sky. When God is seen as He, the soul is seen as She. Just archetypes. Spirit impregnates soul.

The power of your mind is greater than the power of nuclear radiation. Visualize angels dispersing it into nothingness.

The universe literally loves you.

Everyone feels on some level like an alien in this world, because we ARE. We come from another realm of consciousness, and long for home.

When you're missing someone, know it just means that on a soul level they've come to visit.