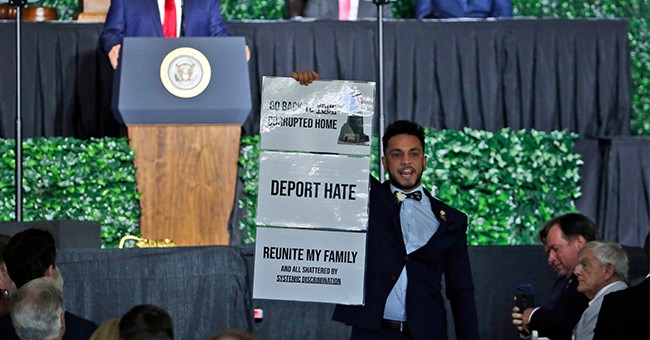 Today President Trump went to Jamestown to commemorate its 400thanniversary. Local Democrats were not happy. Virginia Democrats boycotted the event, with the Mayor of Richmond, Levar Stoney, resigning from the Jamestown Committee, angered that an invitation was extended to the president of the United States. I know, how dare the president deliver an address at Jamestown—the horror! Anything this man does will be protested or criticized by the Left. Therefore, who cares what they have to say. We won in 2016. These losers can take a seat, sulk, and steam about how much they suck. Elections have consequences.

Given the level of hatred liberals have towards Trump, Republicans, conservatives, rural Americans, and this great country in general, it shouldn’t shock us that some loser Democrat decided to score points for the resistance (via NBC News):

A Virginia lawmaker, who is Muslim, shouted "you can't send us back!" briefly interrupting President Donald Trump during an event Tuesday commemorating the 400th anniversary of Virginia's first legislative assembly.

Ibraheem Samirah, a Democrat elected this year to the state House of Delegates, halted Trump's speech with a one-man demonstration as he held a sign that read "deport hate," "reunite my family" and "go back to your corrupted home."

Video from the Jamestown event showed Samirah being led out as some in the audience clapped at his removal while chanting Trump's name.

In a statement later posted to Twitter, Samirah defended his actions, writing that "nobody's racism and bigotry should be excused for the sake of being polite." He added that while he was born in Chicago, his family came to the United States as Palestinian refugees and that his father in 2002 was "forced to literally 'go back'" after he was denied re-entry following a visit to Jordan.

Samirah said the protest was motivated by Trump's message earlier this month that four progressive congresswomen should "go back" to the countries where they originally came from and fix those "crime infested places."

My eyes can’t roll any harder at this. All you did was just remind Trump’s base that there’s an election next year. Also, this will be long forgotten due to the Democratic debates and Trump’s total trashing of Baltimore, which also sent the Left into a meltdown.

Also, given that Virginia Democrats failed to act after Gov. Ralph Northam and Attorney General Mark Herring admitted to doing blackface, let’s get real about this virtue-signaling circus. Democrats here can’t say squat for a long time after that fiasco. These are your rules, morons. Also, this guy appears to have a history of spewing anti-Israel remarks and being a full-blown anti-Semite. Oh yeah, #DEPORTHATE—talk about a total lack of self-awareness. You cannot make this up. Oh, and it seems like his dad also fundraised for terrorists (via Free Beacon):

A member of the Virginia legislature and former volunteer for Rep. Rashida Tlaib (D., Mich.) is connected to multiple anti-Semitic organizations and is the son of a Hamas fundraiser.

Samirah is a vocal supporter of the Boycott, Divestment and Sanctions movement, which seeks to use economic and political pressure against Israel. In a 2014 Facebook post, Samirah urged friends to support the BDS movement while Israel was "most exposed."

As a student at American University and then Boston University, Samirah was an active member of Students for Justice in Palestine. He credits the organization with helping convince students that "Israel REALLY sucks."

SJP relies heavily on American Muslims for Palestine, of which Samirah is also a part, for funds and logistics.

The Anti-Defamation League traces AMP's roots to a Hamas propaganda and fundraising group called the Islamic Association for Palestine. IAP's stated goal, according to internal documents, was to "increase the financial and the moral support for Hamas." One 1992 IAP document describes "publicizing and focusing on the savagery of the Jews" as a key fundraising tactic. According to Matthew Levitt, a terrorism scholar at the Washington Institute for Near East Policy, IAP operated as Hamas's mouthpiece in the United States. Hamas is a terror organization responsible for the deaths of Americans. Its charter explicitly calls for the killing of Jews, not just Israelis.

According to a memo by the FBI released as part of a 2007 case against IAP, a former employee confirmed the organization funneled roughly $3 million per year to Hamas via the Holy Land Foundation. The court ruled in 2008 that IAP could be held responsible for knowingly supporting a murderous organization when it directed funds to Hamas.

A 2000 document from IAP's fourth annual convention lists Samirah's father, Dr. Sabri Ibrahim Samirah, as chairman of IAP's board of directors. He also appears on the board of trustees and executive committee of a separate organization that supports IAP.

BUT Trump is the problem.