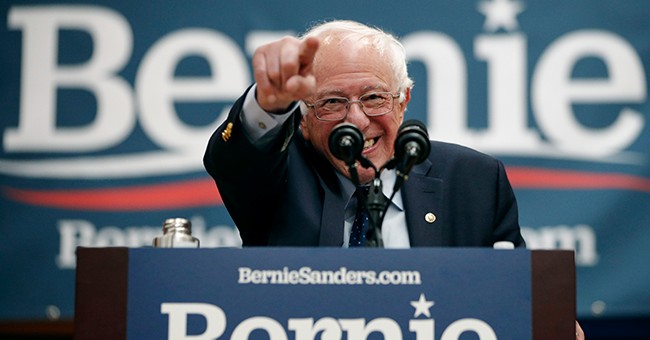 Sen. Bernie Sanders got ambushed because his backyard was not in order. It was a delicious slap in the face. Anytime a left-wing gets slapped with their self-righteous agenda item is a good day for the country. He’s for a $15/hour minimum wage. The problem: he wasn’t paying his unionized staff that amount. It leaked. It led to a rather embarrassing incident for the self-described democratic socialist and it once again showcased how even in socialist America, there would still be two sets of rules, only would be for members of the inner party and not the outer party. In all, it exposed Bernie’s socialist fervor as one of political convenience the same way these equal pay female senators pay their female staffers less than their male ones. Again, these are their rules. Sanders said he would pay the $15/hour salary for staff, but cut their hours. Gee—it’s almost as if all these studies showing how raising the minimum wage leads to work hours being cut and jobs lost are right (via Fox News):

Democrat presidential candidate Bernie Sanders announced this weekend he will cut staffers' hours so that they can effectively be paid a $15-an-hour minimum wage, prompting mockery from critics who say the move is more evidence that Sanders' plan to raise the national minimum wage is hypocritical and would only lead to less work and more unemployment.

The Washington Post first reported last Thursday that Sanders' field staffers were upset that Sanders championed a $15 minimum wage on the campaign trail, and made headlines for railing against major corporations who pay "starvation wages" -- even as his own employees made "poverty wages."

In response, Sanders told The Des Moines Register he was "very proud" to lead the first major presidential campaign with unionized workers, but also "bothered" that news of the internal strife had spilled into the media.

Oh, but you’re not done yet, comrade. There’s an anonymous unfair labor practice complaint that’s been lobbed against you and the National Labor Relations Board could get involved (via Bloomberg Law):

The July 19 complaint to the National Labor Relations Board, filed by an unnamed individual in Indiana, was posted to the agency’s website late July 22. It comes as tense negotiations between the Sanders campaign and the union representing staffers recently boiled over publicly. The Washington Post reported July 23 that unionized organizers for the campaign had won a pay raise and reached a compromise to reduce the hours of some workers.

A copy of the charge has not yet been made public, but the agency’s July 22 docket lists five potential violations of the National Labor Relations Act. The charge also alleges that the campaign unlawfully discharged an employee, modified a labor contract, and engaged in illegal discipline.

Oh, get me some popcorn for this. Karl Marx would be beside himself. Bad, Bernie. Bad comrade.