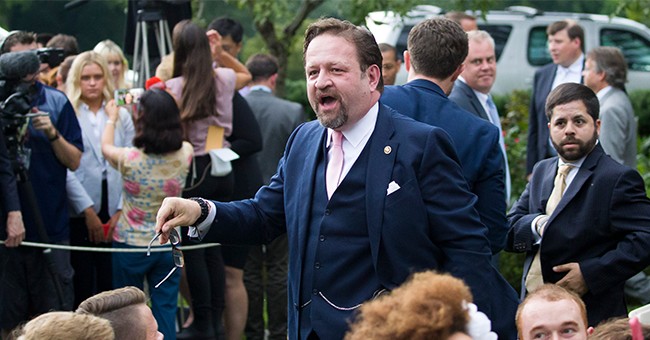 So, CNN actually counted the seconds President Trump remained silent when chants of “send her back” erupted during his rally in North Carolina. It was in reference to Rep. Ilhan Omar (D-MN). Of course, the Left was shocked. Trump has since condemned it, I couldn’t care less. Omar is trash. She peddles anti-Semitic tropes. She supports the viciously anti-Israel BDS movement, whom she recently likened to the Boston Tea Party. And she refuses to condemn terrorism and violence from the far-left Antifa group. Also, liberals were the original ‘deport people we don’t like’ crew when they went after Dr. Sebastian Gorka, former Deputy Assistant to the President and current host of America First on Salem Radio Network. Yeah, looking at you Rep. Jerrold Nadler (D-NY); 2017 was not that long ago (via The Hill):

You and Sen. Dick Durbin formally demanded @SebGorka’s immigration papers from DHS and the White House so you could find a way to deport him, despite the fact that he’s an American citizen. Stop pretending your interest here is anything but partisan. https://t.co/0Rs61z7d5B

Watching the President lie (again) to the American people, spreading racist and xenophobic propaganda against @Ilhan with the crowd being goaded into chants of “send her back” was both chilling and horrifying. There is no place for such racism in our public discourse. https://t.co/SHm3Svb8Mx

This was during the false‘ Gorka is a Nazi’ attacks the Left hurled at the then-Trump aide. And yes, at the time, some on the Hill wanted to strip him of his American citizenship because he worked for the Trump White House. Again, we don’t start these fights, but it’s about time we change course and finish them. It’s an election year. It’s time to fix bayonets. We don’t need to empathize, compromise, or understand Democrats. They’re the enemy. They’re beyond saving. It’s time to start destroying everything they believe in…brutally. Make them embarrassed to believe what they believe and that list is pretty long. Whoever is the most vicious will win the 2020 election. Politics has always been in the gutter, folks. Attack, attack, and attack some more. So excuse me if I don’t care about the chant. Also, are we really going to talk about it for days? It was a blip in the rally lasting a few seconds. Liberal media, Democrats, and the rest of snowflake brigade of progressive America, we know you hate us; we know you think Trump is a racist (he’s not). You think we’re Nazis for supporting him. All you’re doing is reminding us to vote come November 2020. Oh, and you’re doing an excellent job trivializing and rendering meaningless actual acts of bigotry and racism. Hence, why Ilhan Omar is allowed to operate freely concerning her peddling of anti-Semitic talking points, something that House Democrats refused to condemn outright.

Before there was “send her back,” there was “send him back.” These are the Left’s rules and we don’t have to play by them anymore. We don’t need to be scared of them. Ignored them and find ways to annihilate them…politically. Decency can take a vacation. We have socialists to defeat next year.