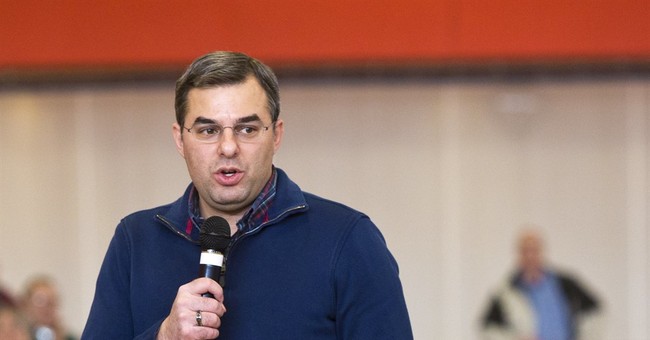 Well, he already left the House Freedom Caucus. He’s for the impeachment of President Donald J. Trump. It’s not shocking that Rep. Justin Amash (I-MI) decided to declare his intention to leave the Republican Party. It’s the usual crap from these clowns. He’s doing it because of principles. That’s fine, but even his stance on why eh supported Trump’s impeachment was a bit shaky since it means buying into the alleged (and probable) abuse of power that was exercised by the government against the Trump campaign during the 2016 election. If the Department of Justice Inspector General report is as scorching as we’ve heard from the grapevine, then everyone on this impeachment train is going to look like idiots. No, a lot of them already are, but it’ll be even more so. Regardless, Amash is done. He announced his exit from the Republican Party in an op-ed for The Washington Post (via WaPo):

My parents, both immigrants, were Republicans. I supported Republican candidates throughout my early adult life and then successfully ran for office as a Republican. The Republican Party, I believed, stood for limited government, economic freedom and individual liberty — principles that had made the American Dream possible for my family.

In recent years, though, I’ve become disenchanted with party politics and frightened by what I see from it. The two-party system has evolved into an existential threat to American principles and institutions.

In this hyperpartisan environment, congressional leaders use every tool to compel party members to stick with the team, dangling chairmanships, committee assignments, bill sponsorships, endorsements and campaign resources. As donors recognize the growing power of party leaders, they supply these officials with ever-increasing funds, which, in turn, further tightens their grip on power.

Modern politics is trapped in a partisan death spiral, but there is an escape.

Most Americans are not rigidly partisan and do not feel well represented by either of the two major parties. In fact, the parties have become more partisan in part because they are catering to fewer people, as Americans are rejecting party affiliation in record numbers.

Today, I am declaring my independence and leaving the Republican Party. No matter your circumstance, I’m asking you to join me in rejecting the partisan loyalties and rhetoric that divide and dehumanize us. I’m asking you to believe that we can do better than this two-party system — and to work toward it. If we continue to take America for granted, we will lose it.

I'm absolutely amazed at the number of Libertarians siding with @justinamash for openly supporting the police state. Trump basically did the Presidential equivalent of saying "Am I being detained" and the civil libertarians are running to the defense of the state.

Every Republican, at some point, is going to disagree with the President about something. There’s nothing unusual about that because we’re not automatons. But calling for his impeachment after his Rights were violated by police-state opponents IS NOT a “principled position.”

Okay—it’s this crap we don't have time for, folks. Partisanship is good. It makes clear who are enemies are, and we have many on the Hill. Sorry if solid job creation is too partisan for Amash. Sorry if small business and consumer confidence reaching their highest marks in decades are too partisan. Sorry if rebuilding our military is too partisan, as is appointing solid conservative judges and reshaping the judiciary. Sorry if unemployment across all ethnic background reaching its lowest levels is too partisan or jobless claims hitting a half-century low is too divisive. Oh, and cutting taxes, regulations, and nixing the Obama Clean Power Plan that stuck a knife in the throats of those in coal country was just too icky for you.

We don’t have time for this nonsense. We need fighters. We need to have a ‘fix bayonets’ mindset until Election Day 2020 because our enemies are coming after us. From the Democratic Party to the liberal media, the enemies of the people are gearing up for a nasty race. We should too, with nothing being off limits. If you thought 1800, 1824, or 2016 were nasty elections—this might be the worst of all time. The Left is desperate to boot Trump and there is no say to what lengths they will go. We cannot tolerate those who cannot see the forest through the trees here. So, sayonara, Mr. Amash; don’t let that door hit you on the way out.

Back home, the now-ex-Republican congressman is facing a primary challenge, where his opponent is reportedly ahead of him by 16 points. Amash also has some investments that could be impacted by this ongoing tension with China on trade. I don’t think this is purely about principle, folks.

As for the rest of us, Happy Independence Day.