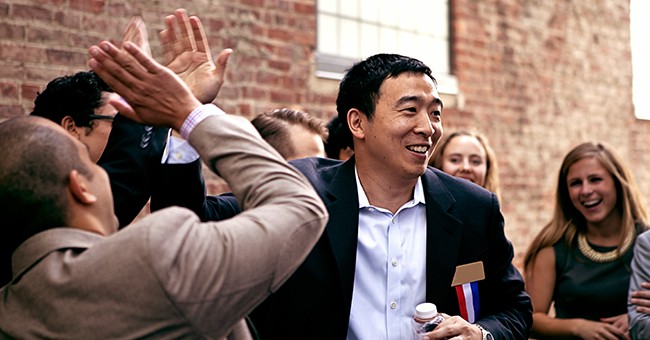 We already have debate shenanigans happening, though those who have zero chance of winning the nomination or the presidency are lobbing these allegations. No, it’s not Marianne Williamson, the anti-vaxxer who gave some zest to the first round of Democratic debates. It was Andrew Yang, who alleges that NBC cut off his mic, pointing to his lack of minutes during the second debate. Throughout the two-hour psychobabble fest, Yang only spoke for two minutes and fifty seconds. NBC has, of course, denied that they turned down his microphone. Joe Concha has more (via The Hill):

Democratic presidential candidate Andrew Yang claimed his microphone was "not on" a few times when he attempted to jump in during Thursday night's Democratic debate in Miami.

"There were also a few times, FYI, where I just started talking, being like, 'Hey, I want to add something there,' and my mic was not on," Yang said while speaking to supporters after the event. "And it's this sort of thing where, it's not like if you started talking, it takes over the [conversation]. It's like I was talking, but nothing was happening. And it was like, 'Oh f---.' So that happened a bit too."

NBC later pushed back on Yang's claims, telling The Hill "At no point during the debate was any candidate's microphone turned off or muted.”

Most likely, Andrew Yang was frustrated that he didn’t get as much speaking time as he would like. He should join the club. Everyone on that stage, especially Biden, Sanders, and Harris wished they had more time. Eric Swalwell surely wanted more time to prove to the nation he isn’t an idiot; he failed spectacularly in that feat. Still, Yang shouldn’t despair. He will certainly qualify for the next debate and in the top tier as well.