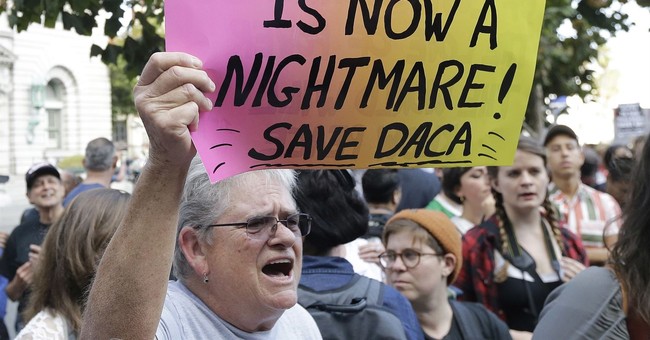 Well, it’s about time. With some judges muddying the moves the Trump White House has tried to make on the constitutionally questionable Deferred Action for Childhood Arrivals, the Supreme Court has decided to hear arguments over why a president cannot undo the executive actions of a previous administration. It’s slated on the docket for the next SCOTUS term, just in time for the 2020 election. DACA recipients have more or less lived in fear of deportation since part of receiving that special treatment that shields them from deportation is a) admitting they’re illegal aliens, and b) provide sensitive information on their whereabouts (i.e. their addresses). Without a doubt, immigration enforcement authorities could deport all 700-800,000 people who are enrolled in this program. The DACA renewal process is every two years and there is a processing fee. One could look at that as a bribe to the federal government to not enforce federal immigration laws (via NBC News):

The U.S. Supreme Court agreed Friday to decide the fate of DACA, the federal program that has allowed 700,000 young people … to avoid deportation.

The court will hear the case during its next term, which begins in October. A ruling in such a contentious case wouldn't be likely before early 2020, assuring that the Deferred Action for Childhood Arrivals program will figure in the presidential campaign.

DACA, an Obama-era initiative, allows children of illegal immigrants to remain in the United States if they were under 16 when their parents brought them to the country and if they arrived by 2007.

The Trump administration moved to end the program in 2017, but federal courts blocked that attempt. Following a brief hiatus, the government began accepting renewal applications from DACA participants, which must be filed every two years. But the Trump administration then urged the Supreme Court to overturn the rulings that allow DACA to continue.

Supporters of DACA have been largely successful in their legal fight to keep the program going. Courts in San Francisco, New York and Washington, D.C., have blocked the government from shutting it down. The Justice Department asked the justices late last year to take up those cases on a fast track and decide the issue during the current Supreme Court term. But the court declined that invitation, allowing the program to continue.

Yet, given how Chief Justice Roberts has sided with liberals on key decisions, like Obamacare and the 2020 Census, expect much anxiety from conservatives on how the decision will be rendered. At this point, let’s not count out another 5-4 decision, with Robert once again knifing us in the back.