ICYMI: Trump Did Strike Back Against Iran...Online 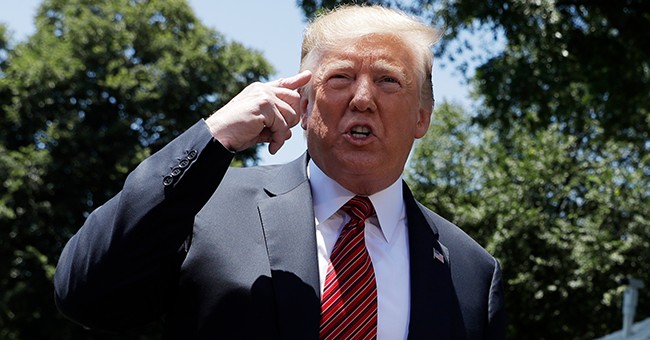 President Trump nixed airstrikes against Iran after the terrorist-supporting nation shot down one of our surveillance drones in international waters. Airstrikes were reportedly underway, but halted at the last minute. Instead, the Trump administration executed cyber attacks, something that was planned in retaliation for Iran’s assault on two oil tankers (via NYT):

United States Cyber Command on Thursday conducted online attacks against an Iranian intelligence group that American officials believe helped plan the attacks against oil tankers in recent weeks, according to people briefed on the operation.

The intrusion occurred the same day President Trump called off a strike on Iranian targets like radar and missile batteries. But the online operation was allowed to go forward because it was intended to be below the threshold of armed conflict — using the same shadow tactics that Iran has deployed.

The online attacks, which had been planned for several weeks, were ultimately meant to be a direct response to both the tanker attacks this month and the downing of an American drone this week, according to the people briefed on the operations.

Trump abruptly called off the attack on Iran last Friday, citing Iranian casualty rates. It was not a proportionate response to the loss of one drone. Trump showed restraint. We were well within our right to launch airstrikes, but the nation is war-weary. Yet, leaving all that to the side remember how Trump was supposedly going to launch a nuclear war with North Korea because…he tweets. He’s supposedly unstable, right? Yeah, that shoddy narrative blew up in the Left’ face, but that will be overlooked. In the meantime, let’s not forget that cyber attacks reaped havoc on Iran’s nuclear program for a time. It’s not a weak response, though one that might not satisfy the war hawk wing of the GOP. Wired had a good piece on Stuxnet, the digital weapon that messed with Iran’s centrifuges:

In January 2010, inspectors with the International Atomic Energy Agency visiting the Natanz uranium enrichment plant in Iran noticed that centrifuges used to enrich uranium gas were failing at an unprecedented rate. The cause was a complete mystery—apparently as much to the Iranian technicians replacing the centrifuges as to the inspectors observing them.

Five months later a seemingly unrelated event occurred. A computer security firm in Belarus was called in to troubleshoot a series of computers in Iran that were crashing and rebooting repeatedly. Again, the cause of the problem was a mystery. That is, until the researchers found a handful of malicious files on one of the systems and discovered the world's first digital weapon.

Stuxnet, as it came to be known, was unlike any other virus or worm that came before. Rather than simply hijacking targeted computers or stealing information from them, it escaped the digital realm to wreak physical destruction on equipment the computers controlled.

Trump also slammed the country with a new round of sanctions today. But watch as Democrats criticize this response as weak. As the saying goes, Trump could cure cancer tomorrow, and no new network, except Fox News, would run it. and if they did, it would be dotted with criticism over why he didn’t cure AIDS.