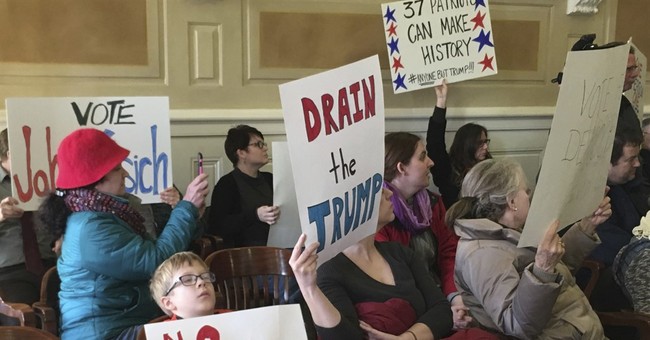 Well, it’s official. Oregon has signed onto the National Popular Vote Interstate Compact. And with that, the entire Left Coast has joined this effort, which is no surprise. Oregon’s Democratic Gov. Kate Brown signed the bill into law yesterday. California and Washington State had already joined this movement years ago, with then-Governor Jerry Brown of California and Christine Gregoire of Washington joining the effort to alter the Electoral College in 2009 and 2011 respectively (via The Oregonian):

Oregon’s Electoral College votes could potentially be awarded to a presidential candidate who doesn’t get the most votes in Oregon. That’s because of a bill signed into law Wednesday by Democratic Gov. Kate Brown.

Her signature on Senate Bill 870 means Oregon is now the 15th state, along with the District of Columbia, that has joined the National Popular Vote compact.

The compact is an agreement to award a state’s Electoral College votes to the presidential candidate who receives the most votes nationwide, regardless of whether that candidate won in that state.

“I think it’s really important to be a part of the national conversation regarding the presidential election,” said Brown. “I think it will encourage candidates to spend more time in states like ours, speaking directly to our voters.”

Folks, this gained steam after Hillary Clinton lost the 2016 election. She got more popular votes than Donald Trump, but that’s not how we elect the president of the United States. You all know that, though the liberal media and other progressives keep reminding us that Lady Macbeth received more popular votes, thanks to California. Also, yes, Hillary got more votes she did not win the popular vote unless 48 percent is 50+1 in which case liberals are living in Orwell’s Oceania where 2+2=5.

Yet, this isn’t only a liberal cause. A lot of Republicans have taken a look at the National Popular Vote Interstate Compact, noting that it will take away the influence of swing states, incentivize the hundreds of thousands of GOP voters in blue states who stay home to vote, allow candidates to run campaigns based on their true convictions, and prevent bad policies tailored to winning over said swing states. A prime example is the Bush administration’s No Child Left Behind Act, which while good as exposing bad teachers, was an overall failure, falling way short of its intended goals in education. This was pitched to win over soccer moms in Hamilton County, Ohio. The latter is probably the best argument for supporting the compact if you wanted to pitch this to Republicans. That and being allowed to run a true red meat conservative campaign with all the hardcore positions tailored to the party base without fear of losing favor in swing states. I’m confident the GOP could win that contest, given what Democrats are shoveling out there. At the same time, why change it?

In our entire history, there have been only five times where the winner of a presidential election won the Electoral College, but not the popular vote. We’re still here. One of the main reasons some in the GOP were looking at this was the current system was already on the verge of being a lock for Democrats. That still could be the case. Florida is the bellwether. If that becomes reliably blue, like New Mexico, then the GOP is cooked in national elections, but the Florida GOP has done well to stave off disaster, winning the 2016 and 2018 elections. I’m fine with the current system, but I’m not afraid to have an open discussion about the compact. Still, there are even some Democrats who are wary of this movement. We did say that Nevada could be another state out west that could join this effort, but their Democratic governor, Steve Sisolak, vetoed the bill in May. His reason is one typically heard by opponents of this push—and it’s not wrong. In fact, he embraces the Republican rebuttal (via CBS News) [emphasis mine]:

Nevada Gov. Steve Sisolak, a Democrat, vetoed a bill to join a national compact to elect presidents by popular vote, saying that the bill would diminish the state's political power. If Nevada had joined the "National Popular Vote Interstate Compact," which has been adopted by 14 states and D.C., it would mean that the state would award its Electoral College votes to the presidential candidate who won the popular vote nationally.

Sisolak wrote in a letter to the speaker of the Nevada Assembly that the bill would allow the state's electors to "disregard the will of the state's electorate"if a candidate won the national vote but lost in Nevada. He also said that joining the compact "could leave a sparsely populated Western state like Nevada with a greatly diminished voicein the outcome of national electoral contests.

Full Disclosure: I attended a seminar on the National Popular Vote Interstate Compact hosted by the Institute for Research on Presidential Elections in 2017.

As Biden Goes Off-Script, White House Tech Team Cuts the Mic and Blasts Music
Townhall
'Honey, do you even HISTORY?' Joy Reid SCHOOLED for pushing revisionist history claiming the parties MAGICALLY switched places
Twitchy
NBC News Has Some Explaining to Do After Cuomo Revelations Implicate Prominent MSNBC Anchor
Redstate
Jussie Smollett Uncovers Who's at Fault for His Race Hoax and You'll Be Shocked to Learn It's Not Jussie Smollett
PJ Media