Trump Had The Best Response To The Democrats' Impeachment Peddling 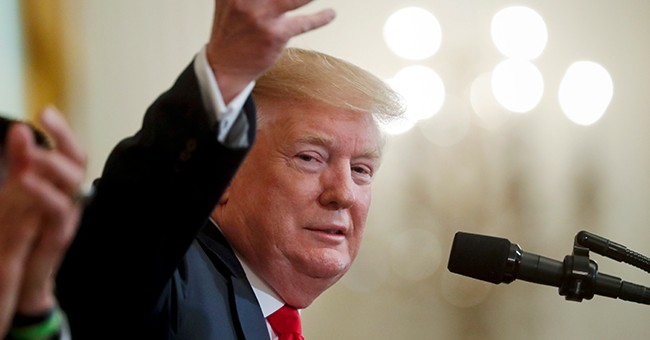 So, with the report by Special Counsel Robert Mueller submitted and proving there was no collusion between the Trump campaign and the Kremlin, this whole circus is over. Granted, the ‘bitter-enders’ will always try to fan the conspiratorial flames, but everyone knows it’s game over. There was no collusion, which was the impetus for this whole fiasco. As for obstruction, this will be the Left’s next buffet of idiocy. There was not enough to pursue formal charges. No charge, no obstruction. Period. We won. The Democrats lost. Still, impeachment is on the table, as the Left simply cannot get over the fact that Trump won the 2016 election. Yet, with the Mueller report, impeachment is dead in the Senate. I mean, for lack of a better term, this whole impeachment nonsense ever reaching the Senate and being actually voted on was already three-fourths away from brain dead. It was pretty much in fantasyland. Now, it’s officially here. Hence, why Trump pretty much told Democrats to shove it when asked about his worries about being impeached (via NBC News):

Question: "Are you worried that your staff is ignoring your orders as the Mueller Report portrays?"

President Donald Trump said Monday that he was not worried at all about impeachment, less than a week after a redacted version of special counsel Robert Mueller's report was made public and as talk of trying to remove him from office has been increasing among Democrats in Congress.

"Not even a little bit," Trump said to reporters at the annual White House Easter egg roll when asked whether he was concerned about the possibility.

Since the release of Mueller's findings, Democrats have been conflicted on what the next steps should be.

Some, including Sen. Elizabeth Warren, D-Mass., a 2020 presidential candidate, have called for the House to begin impeachment proceedings. But other Democrats have warned of the political risk of trying to remove the president.

House Speaker Nancy Pelosi, D-Calif., has urged a wait-and-see approach so lawmakers have a chance to read the full Mueller report and supporting documents.

This has to drive liberals insane because it’s true. Trump isn’t worried because the Republican Senate isn’t going to take this up. All House Democrats can do is have a symbolic vote. Even with all of the Mueller report evidence, there won’t be enough for any rational person to push for impeachment. It will look political, it will be along party lines, and it will only animate Republican voters in time for the 2020 elections. If Democrats want to drive away Independent voters, which appears to be happening with this nonsense, then go ahead. As the president said, “he’s not worried.” He shouldn’t be. Oh, and Nancy Pelosi will have another fight with the nutty squad over this as well. Will she fold up as easily as she did over the anti-Semitism resolution that was totally bungled and watered down in the end? We’ll see.

Wait...So the FBI Lied About the Ending of the Texas Synagogue Hostage Situation
Townhall
Looks like it's up to Zaid Jilani and Christina Pushaw to debunk AP hit piece on Ron DeSantis suggesting he wants to 'shield whites from 'discomfort''
Twitchy
The Latest Polling Will Have Democrats Waking up in Cold Sweats
Redstate
The Left Calls for Tossing NBC's Chuck Todd Off Nakatomi Plaza Again
PJ Media