ICYMI: Here's The Radical Islamic Terrorist Who Wanted To Commit An ISIS-Inspired Attack In The D.C. Area 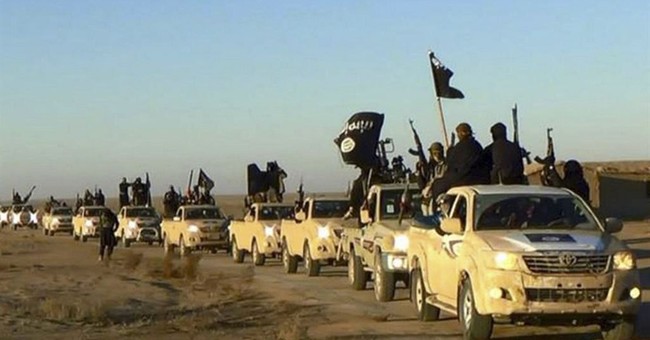 Terror could have hit very close to home. Just across the Potomac lies National Harbor. The Conservative Political Action Conference is held there every year. It’s where the new MGM casino is located. In late March, police arrested a man who wanted to use a vehicle to run over as many non-Muslims as possible. Yes, it was ISIS-inspired. Yes, the suspect is radicalized. Yes, this is radical Islamic terrorism. The suspect’s name is Rondell Henry. He stole a U-Haul truck from Alexandria, Virginia, so he also has another charge of transporting a stolen vehicle across state lines. This attack was planned in the fashion of the Nice terror attack in France where another Muslim terrorist killed nearly 100 people by running them over in a truck (via NBC News):

Federal prosecutors on Monday accused Rondell Henry, 28, of Germantown, Maryland, of planning to carry out the attack. He was arrested March 28 after surveillance video showed him parking and getting out of a U-Haul truck that was reported stolen two days earlier, investigators said.

"He said he wanted to carry out a Nice-style attack," a law enforcement official said, referring to the 2016 truck terror attack that killed 86 people in Nice, France. The Islamic State group claimed credit for that attack, and French authorities said it was an act of jihadist terrorism.

Investigators said Henry, who is a U.S. citizen, harbored hatred for people who are not Muslim and became inspired to commit jihad after watching ISIS propaganda videos.

NBC added that Henry drove the stolen U-Haul to Dulles airport, but security was too tight. He then drove to National Harbor, where he was prepared to die in the planned assault. The crowds, however, were not big enough for his liking, so he broke into a boat and spent the night there. The driver of the U-Haul theft saw Henry’s car following the vehicle. Once the truck was stolen, NBC News said police were able to verify Henry as the suspect due to vehicle registration records. Once Henry was identified and the stolen U-Haul was located, police simply waited for him to wake up and arrested him on the spot (via NYT):

Because the crowds at the National Harbor waterfront on March 27, a Wednesday, were thin, he delayed his plans, prosecutors said. He broke into a boat and hid there overnight, according to court documents.

The next morning, police officers discovered the stolen U-Haul and arrested Mr. Henry after he leapt over a security fence from the boat dock, according to prosecutors. The authorities first identified Mr. Henry through registration records left in his BMW, which was parked in Alexandria, near where the U-Haul was stolen, they said.

Mr. Henry did not have an escape plan, as he did not plan to survive the attack, prosecutors said.

Chilling to say the least, folks.