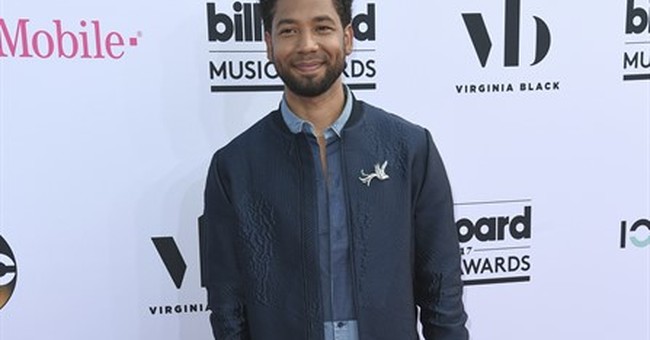 What’s one lesson that can be learned from the Jussie Smollett fiasco: belief is not evidence. Many in the liberal media and progressive activist wing of the country jumped on this bandwagon and it proved disastrous. The story goes that Smollett, an actor on the series “Empire,” was attacked by two white men wearing red hats, shouted homophobic and racist slurs (Smollett is black and gay), punched him, poured bleach on him, and then tied a rope around his neck.

It was later determined that it was two Nigerian brothers, who were reportedly paid by the actor to execute this hate crime hoax. One was an extra on the show, while the other formerly served as Smollett’s personal trainer. Surveillance footage captured the brothers buying items that were described in the so-called attack. They cooperated fully with the investigation when they became persons of interest. Liberal America bought this, ate it up, and now has to face the fallout for believing someone who executed this hoax because he was reportedly upset about his salary on the show. There were also reports that he was unhappy that a racist letter, that he allegedly created and sent to himself, did not get enough media attention. This is crazy. Either did this because he craved attention or because he was unhappy with his salary. They’re both pathetic excuses to orchestrate a hate crime hoax, of course. The Washington Post’sJonathan Capehart said news organizations should have waited a “hot minute” before jumping to conclusions, but also that the Trump era allowed Smollett’s story to seem credible. I’ll get to that in a second.

At the same time, he noted some parts that were just nutty, adding the damage Smollett could cause future hate crime cases being reported. Capehart made these remarks on MSNBC Monday (via Real Clear Politics):

"Just the circumstances and the way he told the story, and what he said happened to him sort of fit in with a -- not a narrative, but a reality for a lot of people in this country since President Trump was inaugurated, that there is an atmosphere of menace and an atmosphere of hate around the country that made it possible for people to either readily believe or want to believe Jussie Smollett. But on the other hand, at the same time, there were people who immediately thought something was fishy," he said.

"It was so over the top. January. Middle of the night, 2:30 in the morning. Ten degrees. And they recognized him on the street?" an incredulous Capehart said.

"There is real pain in this country. There is real fear in this country. And if it turns out that Smollett did, indeed, orchestrated this attack, paid the attackers, then he's done infinitely more damage to the African-American community, people of color, the LGBTQ community," the reporter told MSNBC. "All for what? Reportedly to save his own role in the show? Was it worth it? That's the question I would like to ask Jussie Smollett if it is proven that he orchestrated this attack."

Capehart concluded the media should "wait a hot minute" to digest news as it comes out before jumping to conclusions.

But you see that’s still the annoying part of all this. First, is the media’ abject inability to take any accountability for peddling this hoax. The second is this aura that they’re not part of this liberal bias to frame Trump, his supporters, and the GOP as vile creatures that walk this Earth. This isn’t new. At the same time, I do give a little credit to Capehart and his colleague Nana Efua Mumford, an executive assistant on the Post’s editorial board, who wrote a column detailing why she was skeptical of the Smollett attack and its implications. Capehart cited her in his interview with MSNBC [emphasis mine]:

… I struggled with Smollett’s story.

I tried telling myself that it is possible that two assailants were walking around downtown Chicago at 2 a.m. in January in 10-degree weather, waiting for a black victim. In addition to that, they were stalking around with a bottle of bleach and a rope. And ultimately, the prey they selected was an actor on a show that they must’ve been somewhat familiar with, because they were able to not only name the show but also know that he played a gay character. Never mind the fact that he was likely bundled up because again: Chicago, January, 10 degrees. Also, after he fought to get away, he left the rope around his neck until he got to the hospital.

If Smollett’s story is found to be untrue, it will cause irreparable damage to the communities most affected. Smollett would be the first example skeptics cite when they say we should be dubious of victims who step forward to share their experiences of racist hate crimes or sexual violence. The incident would be touted as proof that there is a leftist conspiracy to cast Trump supporters as violent, murderous racists. It would be the very embodiment of “fake news.”

Yes, and it’s not the first time. The list of fake hate crimes reported is extensive. It’s a mixed bag. On one hand, it’s refreshing to see that America isn’t as racist as liberals would like it to be, which is another reason why liberalism is a mental disease.  On the other, the media doesn’t learn. They won’t. I know that I’m preaching to the choir, but it wasn’t too long ago that BuzzFeed published a totally bogus story about Trump instructing ex-personal lawyer Michael Cohen to lie to Congress about a Russian real estate deal. Who torpedoed it? That would be Special Counsel Robert Mueller’s office that issued a very rare statement debunking the story. And yet, for a whole news cycle, we had Trump Impeachment Theater. At the time CNN’s Jeffrey Toobin worried that this would be taken as proof that there’s a…leftist conspiracy out to get the president—and that these people will do anything, even lie, to get it done.

Yep, we’ve seen this movie before.