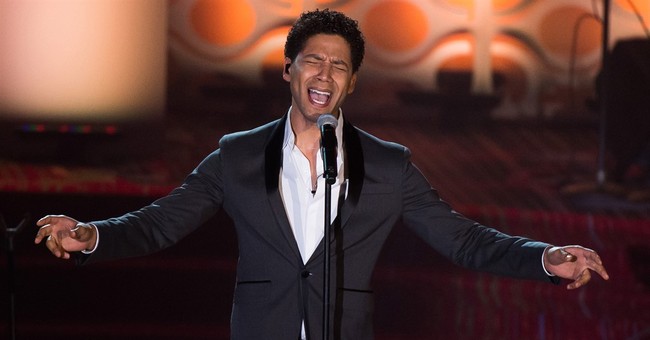 Well, it’s over for Jussie Smollett. His tale of a racially motivated attack on January 29 led to the liberal media jumping the gun. The tale quickly fell apart, and now he’s being formally charged for orchestrating his own hate crime by the Chicago Police Department. Smollett, an actor of the Fox series “Empire,” alleged that two white men assaulted him on that freezing cold night, punching him, poured bleach on him, and then put a rope around his neck. As it turned out, it was two Nigerian brothers, Olabinjo and Abimbola Osundairo, who knew the actor. One was his former personal trainer while the other was an extra on the show. They allegedly were paid by Smollett, had rehearsed the so-called assault, and even bought the rope used in the fake assault. Surveillance footage was released today showing the brothers buying the supplies used in the faux hate crime. As Beth noted earlier, Smollett was also not seen as the victim anymore by police, but a suspect in this incident. Now, the game is over (via NYT):

Jussie Smollett, the “Empire” actor who said he was the victim of a hate crime, was indicted Wednesday night by an Illinois grand jury that found probable cause that he had actually staged the assault he reported to Chicago police in January.

Law enforcement officials said a grand jury had decided that Mr. Smollett falsely reported being attacked in a case that quickly drew national attention, and charged him with a felony count of disorderly conduct.

Mr. Smollett, who is black and openly gay, had told the police that, while walking in downtown Chicago, he had been confronted by masked men who hurled homophobic and racial slurs at him, and announced it was “MAGA country,” a reference to President Trump’s campaign slogan.

In a statement Wednesday evening, the Chicago police said Mr. Smollet “is now officially classified as a suspect in a criminal investigation by #ChicagoPolice for filing a false police report (Class 4 felony). Detectives are currently presenting evidence before a Cook County Grand Jury.”

From the start, investigators had difficulty corroborating Mr. Smollett’s story, even with about a dozen detectives assigned to the case.

No surveillance cameras caught the attack. There were no witnesses. He had not reported it from the scene, and when he got home was still wearing a noose that he said the perpetrators had placed around his neck.

Investigators, though, were able to track two men who appeared on video footage not far from the scene that night. Using ride share data, they discovered the two were brothers who in fact knew Mr. Smollett. One had acted as an extra on “Empire.”

The two brothers are cooperating with the investigation.

Here’s the footage of the brothers buying supplies for the fake hate crime (via CBS Chicago):

CBS 2 has obtained exclusive video of two men linked to the attack on “Empire” actor Jussie Smollett buying a red hat and ski masks from a store the day before the assault.

The video shows Ola and Abel Osundairo placing the masks and a hat on the counter. Smollett has claimed two men wearing a similar hat and masks attacked him on Jan. 29 in Streeterville, according to police. CBS 2’s Charlie De Mar made multiple phone calls and visited several stores to obtain the video.

So, what have we learned today? The liberal media still hates Trump, they still get things totally wrong, and the wider progressive movement needs to shut up for a couple of weeks. You guys ate it on this one. Absolutely ate it and there’s no spinning this away. To those in the Democratic Party, looking at you Sens. Cory Booker (D-NJ) and Kamala Harris (D-CA), do you care to retract your statements on how this non-hate crime was a modern day lynching. Does Rep. Alexandria Ocasio-Cortez (D-NY) think that Smollett was right because he is against Trump, making him morally superior? Remember, in her eyes, you can lie as long as you’re left-wing whacko. Those are the rules in liberal land. In the real world, when you lie to the police, you get charged. A hate crime didn’t happen. That’s worth celebrating, along with the liberal media being beaten and bloodied over another high-profile incident of fake news.