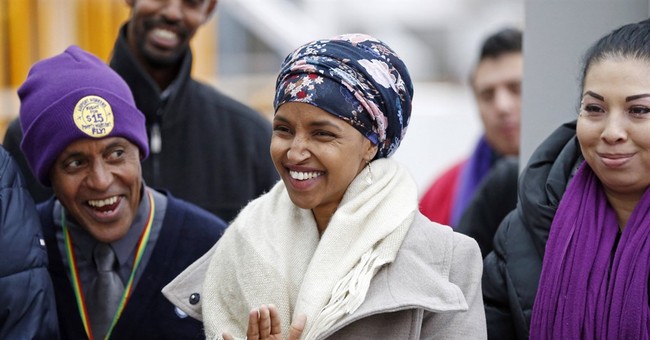 Rep. Ilhan Omar (D-MN) spewed anti-Semitism onto social media and apparently doesn’t seem to care. She was forced to issue an apology when the House Democratic leadership condemned her tweet heavily insinuating that Jewish people are unduly influencing Congress. It’s what has been said before, though much more viciously: ‘the Jews are controlling.’ Back home, in Minnesota, her non-apology apology didn’t go unnoticed with Jewish leaders. This has happened before, folks. And yes, Jewish leader spoke with Omar about her inflection when she speaks about these matters, especially about Israel, who Omar says has “hypnotized” the world for truly seeing how evil they are. She tweeted this in 2012. Omar has yet to delete that tweet. It’s because they spoke to Omar about such matters that Minnesota’s Jewish community is done handling her with kid gloves (via Pioneer Press/TwinCities):

Last year, before she was elected to the House of Representatives, before she emerged from a crowded Democratic field in Minnesota’s liberal 5th Congressional District, leaders of Minneapolis’ Jewish community fashioned what could be described as an anti-Semitic intervention of Omar, a rising star of the left whose remarks had made many fellow Democrats in the Jewish community uncomfortable.

This is relevant because Omar, a freshman member of Congress, has come under fire this week after suggesting on Twitter that supporters of Israel in Congress are bought and paid for by a bipartisan pro-Israel lobbying group. To many, the remark went beyond a critique of money’s influence in politics and evoked the anti-Semitic myth that Jews seek to control the world via money.

Last year, state Sen. Ron Latz, a St. Louis Park Democrat who has served in the Legislature since 2002, invited Omar to his house, where a number of Jewish leaders had gathered. It wasn’t an ambush; Omar knew that group was there, and their purpose was to enlighten her.

We wanted to reach out to her,” Latz recalled. “We were a bit troubled about several things she had said.”

Among their concerns was a 2012 tweet in which Omar wrote: “Israel has hypnotized the world, may Allah awaken the people and help them see the evil doings of Israel.” The language evokes an anti-Semitic trope of Jews as practicers of some type of sorcery that allows them to control others. It wasn’t until last month that Omar apologized, when the tweet gained national attention after she had taken office in Congress

Latz said the gathering was focused, not a mere social gathering. “We didn’t eat much that I recall,” he said. “We talked.”

He declined to attempt to recall exact statements made by him, or others, including Omar, saying that “wouldn’t be fair.” But here’s his summary:

“Over the course of about two hours, we shared with her our concerns for things, including language that has references and meanings beyond just the meanings of words. Tropes, dog whistles — call them what you will. We explained to her how hurtful, and factually inaccurate, they were.

And now Omar is embroiled in yet another instance of anti-Semitism via social media. What’s the reaction from Mr. Latz? It runs “hollow.” I mean, it was a weak sauce apology if you could call it that:

It’s the part where she says “just as I expect people to hear me when others attack me for my identity,” an apparent reference to Omar being trolled and insulted for being a Muslim — a real phenomenon she has encountered since being elected to the Minnesota House in 2016.

“Even in her tweet,” Latz said, “she cannot get away from saying that if other people criticize her, they run the risk of being labeled anti-Muslim. We have to call that out. At some point, it becomes a little tired to hear her say she’s being ‘educated.’ ”

Latz implied the latest incident might lead to a steady chorus of criticism from him and others.

“What can be done now is those of us who disagree sharply need to speak out publicly and forcefully. Some have been treating her a bit with kid gloves. No more.”

It’s not just Omar. Rep. Rashida Tlaib (D-MI), like Omar, is also a supporter of the viciously anti-Israel Boycott, Disinvestment, Sanctions movement that has also been trashed as an anti-Semitic. A D.C. councilman claimed that Jewish people controlled the weather. So Democrats have an anti-Semitism problem? Because it appears to be a growing issue.