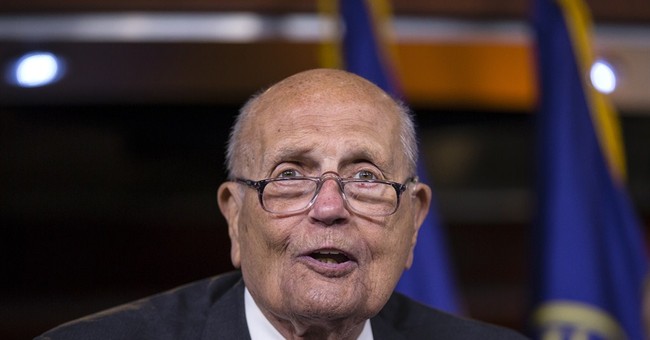 Former Democratic Rep. John Dingell (D-MI) has passed away at the age of 92. He was the longest-serving member of Congress, holding office for a staggering 21,572 days. He took office in 1955 to represent the 15thcongressional district, now the 12th district, in Michigan, succeeding his father; Rep. John Dingell, Sr. He served until his retirement in 2015. His wife, Debbie, now occupies the seat. Congresswoman Dingell had signaled that her husband was entering his final days, informing the public that he had moved into hospice care on Wednesday (via Fox News):

Friends and colleagues know me and know I would be in Washington right now unless something was up. I am home with John and we have entered a new phase. He is my love and we have been a team for nearly 40 years.

“It is with a heavy heart that we announce the passing of John David Dingell, Jr., former Michigan Congressman and longest-serving member of the United States Congress," the congresswoman said in a statement following Dingell's death.

"Congressman Dingell died peacefully today at his home in Dearborn, surrounded by his wife Deborah. He was a lion of the United States Congress and a loving son, father, husband, grandfather, and friend. He will be remembered for his decades of public service to the people of Southeast Michigan, his razor sharp wit, and a lifetime of dedication to improving the lives of all who walk this earth.”

The Michigan Democrat was considered an authority on Congressional procedures, akin to the legendary Sen. Robert Byrd, D-WV. Dingell was best known for his legislative skills, deep reverence for history and stinging wit.

Nicknamed “The Truck” during his longtime tenure as chair of the House Energy and Commerce Committee, the congressman from Detroit fueled the passage of many landmark measures, including health care reform, energy regulations and telecommunications expansion.

Beyond Dingell’s policymaking prowess, journalists, aides and fellow lawmakers frequently sought the opinion of the dean of the House to put current events in context. Did Congress really deserve those abysmal approval ratings? Had partisanship spiked out of control? How could legislating, an inherently messy process, be done more efficiently?

In his answer, Dingell quoted Benjamin Franklin’s response to a question of whether the founders had created a monarchy or a republic: “A republic, if you can keep it.”

- Among milestones for Congress during his tenure: House adopted an electronic voting system (1973), began televising its proceedings (1979), adopted constituent email (1993).
(2/)

- Dingell elected in a special election on 12/13/1955 to fill the seat left vacant by death of his dad John D. Dingell Sr. Succeeded by his wife, @RepDebDingell (D-MI) - longest consecutive service for a single family. (Facts courtesy House Historian via @RebeccaRKaplan) (3/3)