It's Official: Cory Booker, Who Groped High School Friend Without Her Consent, Is Running For President 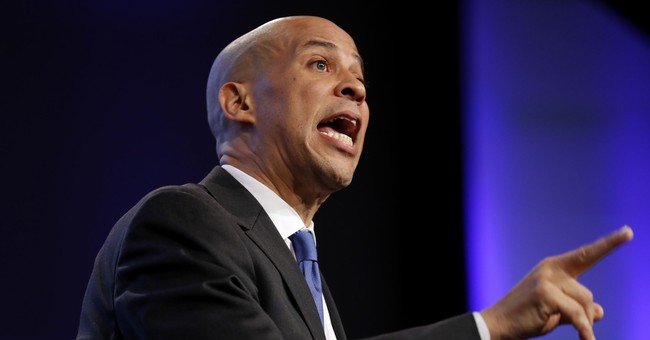 Well, mark this under not shocking. Those close to Sen. Cory Booker (D-NJ) said they were told by him that he was running for president. This was expected. The New Jersey Democrat planned to make it official during Black History Month, which starts today. This morning, as Leah noted, Booker formally announced that he was running. So, here's to you, roamin’ hands Spartacus...I'll get to that in a second. Yesterday, there was a lot of buzz that news of Bookers' 2020 run would be coming soon (via The Hill):

Sen. Cory Booker (D-N.J.) on Thursday began calling members of Congress informing them he is running for president and is quietly making overtures to members for support, three congressional sources told The Hill.

"Yes, he is reaching out to members for their support,” said a former Democratic aide with direct knowledge of Booker’s intentions. "He's going to do it during Black History Month,” which starts on Friday.

Among those who received a call Thursday were senior members of the Congressional Black Caucus (CBC), of which Booker is a member.

“He’s making calls,” a fourth source, Rep. Frederica Wilson (D-Fla.), confirmed to The Hill on Thursday night. “He left me a voice message. I have to call him back.”

A Booker spokesman declined to comment for this story.

I’m running for president. Join me on this journey. https://t.co/fEDqOVIfwh pic.twitter.com/h1FTPUYRzo

Now, Bernie Sanders is looking to mount another White House run, but he’s being criticized for how his 2016 campaign operated concerning the human resources department. It was reportedly a den of sexism and sexual harassment. For Booker, well, he straight up admitted to groping a high school friend without her consent. He detailed it in his school's newspaper.

This story was unearthed during the Brett Kavanaugh Supreme Court confirmation hearings, where Democrats put on a great show of theatrics, smearing a qualified candidate for no other reason other than they didn’t like Kavanaugh or Trump for nominating him. It was a character assassination, but in the end, Kavanaugh persisted. Booker called for the process to be delayed over the baseless allegations of sexual misconduct lobbed against Kavanaugh, which led to the New Jersey senator being called a hypocrite (via Fox News):

New Jersey Democratic Sen. Cory Booker is facing accusations of hypocrisy over his calls to delay the confirmation vote of Supreme Court nominee Brett Kavanaugh amid sexual misconduct allegations, as he once admitted groping a friend without her consent in high school.

“New Year's Eve 1984 I will never forget. I was 15. As the ball dropped, I leaned over to hug a friend and she met me instead with an overwhelming kiss. As we fumbled upon the bed, I remember debating my next 'move' as if it were a chess game,” Booker wrote in the student-run Stanford Daily newspaper in 1992.

“With the 'Top Gun' slogan ringing in my head, I slowly reached for her breast. After having my hand pushed away once, I reached my 'mark,’” he continued, without explaining what he meant by “mark.”

In the era of Me Too, we’ll see how this play out. Going by the rules, Booker should be pressed on this, right? Then again, the Left has weaponized Me Too to go after their political opposition as we saw with Kavanaugh. All while ignoring that the sleaze problem that’s right in their backyard.