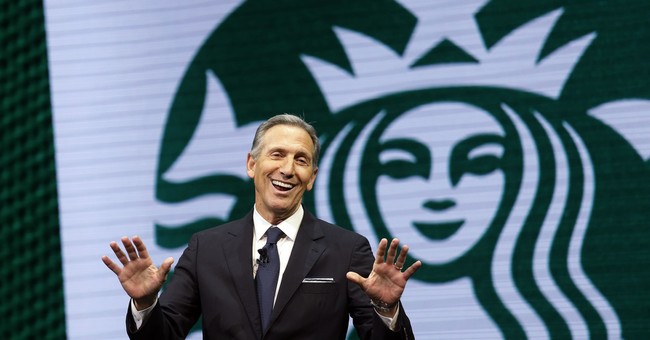 I thought there couldn’t be a person the Left would hate more than President Trump, but there might be a candidate: former Starbucks CEO Howard Schultz. Schultz is mulling a presidential run. Liberals are desperate to beat Trump in 2020, and they see the coffee man as someone who could very well help the president get a second term. As a result, he’s getting a deluge of hate from the Left, who are pushing a full-court press in urging him to drop his bid. If he doesn’t, there will probably be boycotts, or so says the folks who are most staunchly opposed to his candidacy. Schultz said he would run as a “centrist independent” in an interview with CBS’ Scott Pelley on 60 Minutes (via NBC News):

Democrats were out in full force on Sunday blasting the idea of an independent presidential bid by longtime Democrat and billionaire businessman Howard Schultz, who said he was "seriously thinking" of doing so.

Julián Castro, a former Housing and Urban Development secretary under President Barack Obama and a contender for the 2020 Democratic presidential nomination, urged the former Starbucks CEO to not pursue such a run.

"I have a concern that if he did run, that, essentially, it would provide Donald Trump with his best hope of getting re-elected,” Castro said on CNN's "State of the Union."

Neera Tanden, president of the Center for American Progress, went much further than Castro, tweeting that "Vanity projects that help destroy democracy are disgusting."

"If he enters the race, I will start a Starbucks boycott because I’m not giving a penny that will end up in the election coffers of a guy who will help Trump win," she said.

Congratulations to @HowardSchultz on becoming the second most hated person in America!

If Howard Schultz gets into the presidential race, @MoveOn, @IndivisibleTeam, the @DNC, the major unions, and the major presidential campaigns should all use their email lists to promote a Starbucks boycott until he drops out.

A Think Progress editor was viciously opposed to a Schultz White House, telling the former Starbucks CEO to “eat s**t.” Schultz said he was not a fan of the Left’s Medicare for All nonsense, which would certainly earn him the ire of Democratic primary voters (via NTK Network):

During the “60 Minutes” interview, Schultz harshly criticized Medicare For All, Democrats’ $32.6 trillion government-run health care option that has grown in favor among 2020 candidates. Schultz likened it to Trump’s border wall.

Schultz told the New York Times he “planned to crisscross the country for the next three months as part of a book tour before deciding whether to formally enter the race.” Schultz is worth $3.4 billion, according to Forbes.