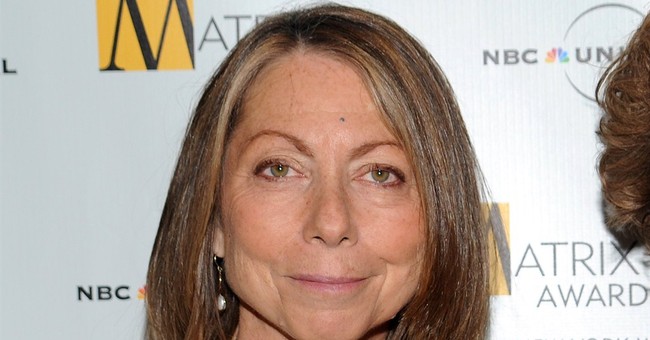 The New York Times has its hits and misses, though it’s mostly the latter. As the saying goes, even a blind squirrel finds a nut. The paper is a hallmark of the liberal media establishment. It’s a paper for the urban elites and one that has become viciously anti-Trump. To some, that erodes its credibility, while others think that it’s bad, though in keeping with his political leanings. The only problem is that they fail to admit it. It’s one thing to be biased and admit you’re biased. You know what you’re getting with Townhall. It’s another thing to act like Democratic operatives but then articulate forcefully that you’re some objective beacon of journalism. Fired Times editor Jill Abramson, admitted that her former paper’s anti-Trump bias gives credence to the attack that the mainstream media is more of an opposition party. Abramson has a new book coming out about the media business, where she also sheds light into what got her fired in 2014 (via Fox News):

Jill Abramson, the veteran journalist who led the newspaper from 2011 to 2014, says the Times has a financial incentive to bash the president and that the imbalance is helping to erode its credibility.

In a soon-to-be published book, “Merchants of Truth,” that casts a skeptical eye on the news business, Abramson defends the Times in some ways but offers some harsh words for her successor, Dean Baquet. And Abramson, who was the paper’s only female executive editor until her firing, invoked Steve Bannon’s slam that in the Trump era the mainstream media have become the “opposition party.”

“Though Baquet said publicly he didn’t want the Times to be the opposition party, his news pages were unmistakably anti-Trump,” Abramson writes, adding that she believes the same is true of the Washington Post. “Some headlines contained raw opinion, as did some of the stories that were labeled as news analysis.”

What’s more, she says, citing legendary 20th century publisher Adolph Ochs, “the more anti-Trump the Times was perceived to be, the more it was mistrusted for being biased. Ochs’s vow to cover the news without fear or favor sounded like an impossible promise in such a polarized environment.”

Abramson describes a generational split at the Times, with younger staffers, many of them in digital jobs, favoring an unrestrained assault on the presidency. “The more ‘woke’ staff thought that urgent times called for urgent measures; the dangers of Trump’s presidency obviated the old standards,” she writes.

Well, there’s no shocker there concerning how the young, left-wing comrades of the Times wanted to turn the paper into an outlet for anti-Trump America. Just be honest, guys. You’re liberal. You hate Trump. And your material is only for liberals. You’re an opposition newspaper. But the Times and other like-minded publications will never admit it, of course. They don’t think they’re biased, and they’re pampered. The media’s ludicrous reactions to when Trump bashes them, most of the time legitimately, is a prime example. Trashing the press isn’t a threat. It’s merely what millions of Americans do on a daily basis. The only difference is that Trump uses the bully pulpit to get that message across. It’s what Trump’s supporters want. He’s a man who will deliver uppercuts to the media, which is something the GOP base has been dying to see for years.