Senator McSally? Jon Kyl Is Gone At The End Of The Month, Gov. Ducey Needs A Replacement 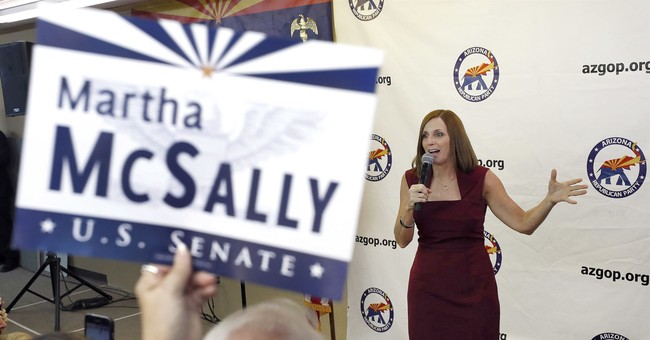 Well, this was expected. Sen. Jon Kyl (R-AZ) is out at the end of the month. Kyl served previously in the Senate before retiring after the 2012 elections. He left public life, but agreed to fill in temporarily for the late Sen. John McCain. Gov. Doug Ducey, who handily won re-election this year, now has to appoint a replacement. Could it be Martha McSally, who barely lost to Senator-elect Kyrsten Sinema in November? It’s still possible, but word is spreading that her stock has fallen in the governor’s office. One of the reasons was reportedly due to her campaign team’s memo on why she lost to Sinema (via WaPo):

"A replacement to the seat will be announced in the near future," Ducey says. https://t.co/DEr9Qj9lue pic.twitter.com/j0NtmN4SPw

Arizona Gov. Doug Ducey has lost enthusiasm for appointing Rep. Martha McSally, a fellow Republican, to the Senate in recent weeks even as Republican leaders in Washington have championed her.

Ducey has made no firm decision and McSally, who narrowly lost this year’s Senate race, remains a finalist to fill the seat that John McCain held for decades, a seat that may soon open up. But her stock has fallen in the eyes of the governor, according to two people familiar with his thinking, as Ducey approaches one of the most significant decisions of his political career.

Ducey’s choice would affect not only the future of the Senate but the 2020 elections in an increasingly competitive battleground state. It could also impact his relationship with Senate Majority Leader Mitch McConnell (R-Ky.), a McSally advocate, as well as other party leaders who want to see more Republican women in Congress.

There are several reasons McSally’s chances have faded, according to the people who spoke on the condition of anonymity to freely discuss private conversations. One is a post-election memo her campaign strategists provided to The Washington Post last month, which attributed her defeat in November to external factors. Among them: strong Democratic fundraising, a geographic disadvantage and voter hostility toward President Trump.

The memo sparked outrage inside Ducey’s circle and among broader swaths of influential Republicans, who felt her team did not own up to its strategic mistakes and was trying to deflect blame for her loss to Democratic Rep. Kyrsten Sinema.

Whatever the case, we need someone who will be a team player and not go off the reservation in the way Jeff Flake has on the GOP’s judicial agenda. Flake is out at the end of the year as well, and it cannot come soon enough. In the meantime, it looks like McSally isn’t at the top of the governor’s list of possible appointments anymore.

Why the Liberal Media Won't Be Able to Use the Horrific Buffalo Shooting to Smear Conservatives
Townhall
Eric Swalwell's 4-year-old wants to know what he's doing to help the people in Buffalo
Twitchy
Tucker Carlson Responds to Charges He Inspired Buffalo Shooter, Makes His Critics Look Like Childish Ghouls
Redstate
Put a Fork in Portland
PJ Media