ICYMI: NPR Was Taken To The Woodshed For Peddling Straight Fake News About Donald Trump Jr. 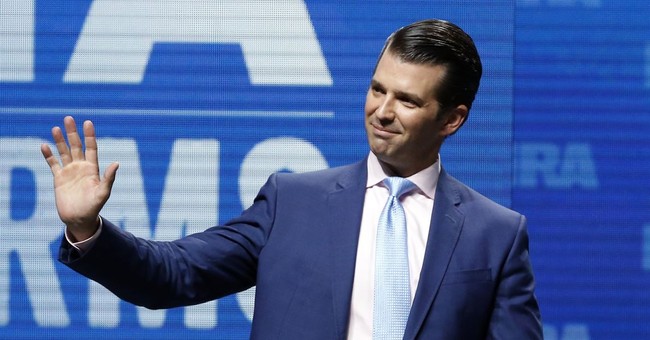 Collusion! Treason! Total garbage! The latter is what best describes the Russian collusion hysteria that has resurfaced after Paul Manafort, President Trump’s former campaign chairman, and Michael Cohen, the president’s former lawyer, were tossed into the shredder of the DOJ’s investigation into the matter. Special Counsel Robert Mueller has been trying to find evidence of collusion between the Trump campaign and the Kremlin during the 2016 election for over a year. So far, he’s found nothing, which means the liberal media has to start making stuff up—literally.

Take National Public Radio, who tweeted on November 30 that “Donald Trump Jr. testified to Congress that the Trump organization’s negotiations’ to develop Trump Tower Moscow ended at the end of 2014, but that conflicts with Michael Cohen, who said in a guilty plea the negotiations continued well into 2016.” The tweet was deleted because—shocker—the Trump Tower Moscow story was totally fake. The transcript is available, folks.

This entire story is a lie. Trump, Jr. was explicitly asked whether the Trump Organization was pursuing a plan to develop a Trump Tower in Moscow in 2016. His answer: "Yes." He even offered to give the 2015 LOI signed by Trump to Judiciary investigators. https://t.co/omMSmse5rs

You don't have to take my word for it. Here's the actual transcript, which @nprpolitics conveniently didn't include. pic.twitter.com/gcEouly8OV

That NPR story about Don Jr. is still being shared.

And it's still not accurate.

This NPR story appears to be wrong. It notes that Trump Jr. told a Senate committee that a deal in Moscow died of "deal fatigue" by 2014.

But that was a deal with the Agalarovs. He was also asked if a deal was in the works in 2015/2016 and said yes.https://t.co/B8SuolTfyK pic.twitter.com/w34SamzXJF

It’s bad, folks. As The Federalist Sean Davis noted, “it gets even worse for NPR Politics here. They lied about the question, which Donald Trump Jr. was responding to when he said ‘Certainly not '16.’ The actual question was if he knew whether the Emin and Aras Agalarov were trying to build a Trump Tower at that time.”

His colleague Mollie Hemingway has more, where she takes Philip Ewing, who wrote the NPR piece, to the woodshed for not being able to read a simple transcript:

In fact, Senate investigators were asking Trump Jr. about a series of efforts to develop property in Russia, going back several years. Reporter Phil Ewing (reporter Tim Mak contributed to the story) conflates one of those efforts with another separate effort. That conflation results in the false news report.

Q. It’s been reported that in late 2015 or 2016 when now President Trump was running for office the Trump Organization was pursuing a plan to develop a massive Trump Tower in Moscow. Is that accurate?

A hundred pages later, the investigator asks if there was an effort by Felix Sater to “bring together a development in Moscow.” Trump Jr. says he believes there was an effort to work on that with Cohen in 2015. Asked if he knew about the deal, he says not much, but that it got to the point his father signed a letter of intent. He said he would provide a copy of that letter. Trump Jr. says he was aware of this deal “peripherally.”

Then the investigator asks, “In this same time frame, 2015 or 2016, when Mr. Sater and Mr. Cohen were exploring a possible deal, do you know if anyone else was also exploring a deal simultaneously with the Trump Organization to build in Moscow?” (emphasis added).

Q. In this same time frame, 2015 or 2016, when Mr. Sater and Mr. Cohen were exploring a possible deal, do you know if anyone else was also exploring a deal simultaneously with the Trump Organization to build in Moscow?

Q. We’ve discussed the Agalarov family, Emin and his father Aras. Do you know if they were also exploring building a Trump Tower in Moscow?

A. We had looked at it earlier than that, but it sort of faded away I believe at the end of ’14.

A. Certainly not ’16. There was never a definitive end to it. It just died of deal fatigue.

As is obvious from the context, the quotes Ewing used weren’t about the Cohen efforts, but the Agalarov efforts.

NPR finally offered a correction, but even that was torched by reporters across the spectrum. It was one of those rare moments where conservative and liberal media outlets were calling out NPR for peddling straight fake news. Here’s NPR’s correction, but not after it slithered it’s way onto CNN. Our friends at Twitchy captured this train wreck:

And CNN analyst @Susan_Hennessey just made the same lie on-air

A former CIA chief of operations retweeting a former NSA lawyer who is touting a fake story about Trump Jr.'s testimony. Hope these analytical failures weren't common in their previous work. pic.twitter.com/cPrCZyAXyK

An earlier version of this report mischaracterized an answer Donald Trump Jr. gave to Senate investigators in 2017 about the prospective projects his family was negotiating with people in Moscow.

The story reported that Trump Jr.'s response — that negotiations on one project concluded by the end of 2014 — contrasted with the version of events as laid out in the guilty plea by Michael Cohen on Thursday. In fact, Trump Jr. and investigators were alluding to a different set of negotiations — not to a deal that Cohen was reportedly pursuing. Trump Jr. did acknowledge in his testimony that Cohen and another man were exploring a possible deal in Moscow in 2015 or 2016.

Trump Jr. did not address what Cohen has now admitted — that talks about such a deal continued at least into June 2016, longer than previously known and well into the presidential campaign.

The article's "update" is not good. Trump Jr. was clearly referring to *a particular deal* as having "died of deal fatigue" -- and it's not the Cohen deal.

The fifth paragraph below is the important paragraph, which undercuts the existing headline. pic.twitter.com/Qt8Gkyx13g

To CNN and like-minded company, this is why you’re not trusted. This is why conservatives trash you. And this is why Trump beats you like a drum at campaign events. It’s your own fault. So, quit playing victim. Quit with the whining. NPR stepped on a rake. They deserve to be absolutely flogged for this error. It also reinforces everything about this whole narrative. There is nothing to this story—nothing. So, when Russian collusion hysteria strikes up again. It’s hunting season…hunting for liberal morons who think this actually happened in 2016.

Share this on Facebook
Tweet
No, Kyle Rittenhouse Being Found Not Guilty Did Not Cause the Buffalo Shooting
Julio Rosas
Here We Go Again: Yet Another Democratic Politician Makes a Fool of Themselves Over Banned Books
Rebecca Downs