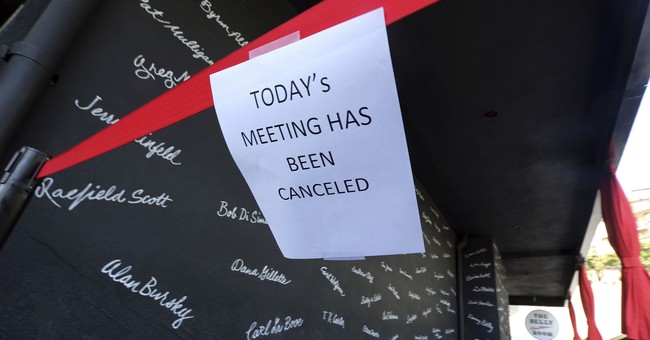 This is just too good. College liberals have longed been the brunt of jokes because they can’t handle real world situations. They try to throw the snowflake swipe back at conservatives when they get angry, which is usually entertaining because it’s legitimate anger over shoddy public policies or stupid comments…derived from American liberalism. Conservatives don’t get offended by saying “Merry Christmas,” Halloween costumes, or stand up comedy acts. That’s all on the left-wingers. It’s stupid. And they’re stupid for trying to say that the Right are the real snowflakes of the country because…they get angered at hosts at awards shows for major entertainment categories mock God and prayer. We’re one of the most religious countries, if not the mostreligious, in the industrialized world—praying is common. Frothing at the mouth because…someone said, “you’re the best person for the job” is not normal.

You know what else isn’t normal. Yanking an Asian-American comic from an event that’s supposed to encourage expression…from Asian Americans. Yeah, as you would guess, some of his jokes were offensive, except that they were not. The event was held at Columbia University last Friday (via Columbia Spectator):

Saturday Night Live writer and comedian Nimesh Patel was pulled from the stage by event organizers after telling jokes that were criticized as racist and homophobic during his performance at cultureSHOCK: Reclaim, an event held by Columbia Asian American Alliance on Friday night.

During the event, Patel’s performance featured commentary on his experience living in a diverse area of New York City—including a joke about a gay, black man in his neighborhood—which AAA officials deemed inappropriate. Patel joked that being gay cannot be a choice because “no one looks in the mirror and thinks, ‘this black thing is too easy, let me just add another thing to it.’”

About 30 minutes into Patel’s set, members of AAA interrupted the performance, denounced his jokes about racial identities and sexual orientation, and provided him with a few moments for closing remarks. Compared to his other jokes, ones specifically targeting sexual orientation audibly receive less laughter from the crowd.

In an official statement released on Dec. 3, AAA stated that while they acknowledge that discomfort and safety can co-exist, the discomfort Patel caused with his remarks and overall performance opposed AAA and cultureSHOCK’s mission to celebrate, empower, and explore identity in a safe space. They apologized for inviting him to perform at the event.

For Sofia Jao, BC ‘22, problems with the performance resided not in the set, but with Patel’s closing remarks.

“I really dislike when people who are older say that our generation needs to be exposed to the real world. Obviously the world is not a safe space but just accepting that it's not and continuing to perpetuate the un-safeness of it… is saying that it can’t be changed,” said Jao. “When older generations say you need to stop being so sensitive, it’s like undermining what our generation is trying to do in accepting others and making it safer.”

This is the most college lefty thing ever. The older generation is trying to help you not be total morons and shutting down a comic a an event ironically named “CULTUREshock.” You cannot make this up. Safe spaces, speech codes, etc. is not real. It will never be a thing. And you’re just going to have to deal with it. What happened a this event just encapsulates the liberalism in higher education: soft, dumb, and hypocritical.