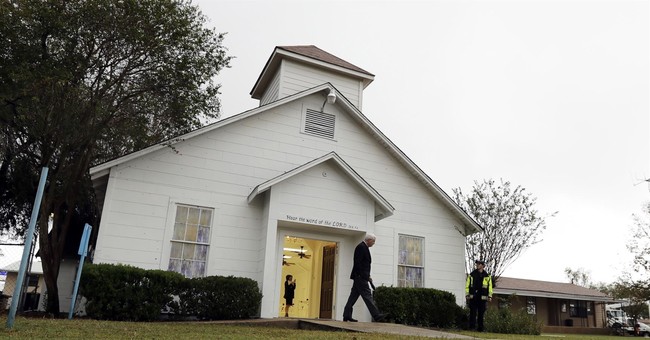 In November of 2017, Devin Patrick Kelley entered a church in Sutherland Springs, Texas and killed 26 people. It was horrific. He was an Air Force veteran who was given a bad conduct discharge in 2014, but not before serving a year in jail for domestic violence. Dishonorable discharges bars one from owning firearms, not bad conduct—but the domestic violence conviction at his 2012 court martialis the real center of controversy. Kelley was still able to pass a background check for the AR-15 rifle he used for the crime. How is that so? Americans convicted of domestic violence are prohibited from owning guns. Well, it would seem the Air Force failed to informthe FBI of Kelley’s convictions. We’ve known this for a while, but it’s now part of an official Defense Department report:

The gunman who opened fire in a rural Texas church last year, killing 26 people and murdering as many as three generations of one family, could have been stopped from legally obtaining a firearm if the Air Force hadn't shirked its duty, according to a newly released Defense Department report.

But the Air Force should have also submitted his fingerprints to the FBI, and failed to do so on four occasions, the Defense Department's 131-page inspector general report found.

Kelley's conviction should have also triggered the Air Force to send a final disposition report to the agency, which would have put him in the FBI's criminal history database and potentially prevented him from legally buying a gun.

According to the report, Kelley used three of the guns he bought for the massacre at the First Baptist Church of Sutherland Springs. Armed citizens shot at Kelley as he fled in his car; he later died from a self-inflicted gunshot wound to the head.

One reason for the lapse in reporting of Kelley's fingerprints to the FBI occurred when a case agent investigating the domestic assault said they didn't know it was a requirement.

Other agents could not give a "clear, supportable reason or explanation" for why Kelley's fingerprints were not submitted to federal authorities, the report said.

In the wake of the shooting, Air Force officials asked the inspector general to look into Kelley's past and combed through its databases for other cases where fingerprints were not given to the FBI.

Like Emanuel African Methodist Episcopal Church shooting in Charleston, South Carolina, the shooting at Marjory Stoneman Douglasin Florida, and the Navy Yard Shooting, this tragedy was avoidable. While the anti-gun control crowd ignorantly says we need new laws after these shootings, they never stop to think about better enforcing the laws we have on the books now that would prevent these shooters from committing their heinous acts. This one in Texas is especially hard-hitting, not only because of the loss of life, which was terrible, but because it was also totally avoidable.