How Did The Texas Shooter Pass A Background Check After A Domestic Violence Conviction? 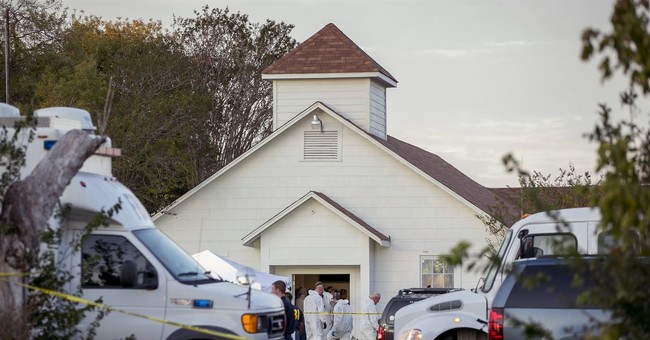 Christine wrote about the tragic shooting in Sutherland Springs, Texas, outside of San Antonio. Around 11 A.M. on Sunday, 26-year-old Devin Patrick Kelley opened fired inside a Baptist Church. He killed 26 people, including the pastor’s 14-year-old daughter. At least another 20 were wounded. Kelley used a rifle in the attack. The victims range from 5 to 72 years of age. The New York Times reported that the Baptist church where the attack occurred is predominately white, unlike the other horrific, and racially motivated, attack on a Black Methodist Episcopal church in South Carolina by Dylan Roof in 2015.

Also, mentioned in the story was that a member of the community engaged Kelley. Johnnie Langendorff, who was passing by the church at the time of the attack, saw the armed neighbor who explained to him the situation. The two men then raced down the road, doing almost 100 MPH. Kelley crossed into a neighboring Guadalupe County, where he crashed his car and was found dead inside his vehicle (via NYT):

The gunman was identified as Devin Patrick Kelley, 26, according to two law enforcement officials who spoke on the condition of anonymity because the investigation is continuing. Mr. Kelley, who lived in New Braunfels, Tex., died shortly after the attack.

He had served in the Air Force at a base in New Mexico, but was court-martialed in 2012 on charges of assaulting his wife and child. He was sentenced to 12 months’ confinement and received a “bad conduct” discharge in 2014, according to Ann Stefanek, the chief of Air Force media operations.

The motive of the attack was unclear on Sunday, but the grisly nature of it could not have been clearer: Families gathered in pews, clutching Bibles and praying to the Lord, were murdered in cold blood on the spot.

Mr. Kelley started firing at the First Baptist Church in Sutherland Springs not long after the Sunday morning service began at 11 a.m., officials said. He was armed with a Ruger military-style rifle, and within minutes, many of those inside the small church were either dead or wounded. The victims ranged in age from 5 to 72, and among the dead were several children, a pregnant woman and the pastor’s 14-year-old daughter. It was the deadliest mass shooting in the state’s history. At least 20 more were wounded.

The question now is how in the world did a man convicted in a court martial for domestic violence in 2012 pass a NICS check in 2016?

Academy Sports + Outdoors confirms suspect in Sutherland Springs shooting purchased a firearm from one of its locations in 2016. pic.twitter.com/jAwP9axB8X

USAF: Texas shooter court-martialed in 2012 for two counts of Article 128 UCMJ, assault on his spouse and assault on their child (1/2)

So, given that Kelley was given a "bad-conduct discharge" from the U.S. Air Force in 2014, which is not the same as a dishonorable discharge, contrary to previous reports, and spent a year in jail after beating his wife and child in 2012--how did he obtain firearms? Yes, a dishonorable discharge would also make him a prohibited person, but either way, Kelley is a banned person; he a convicted domestic abuser.

This is an interesting new development but if he was convicted of domestic violence he'd be a prohibited person anyway. https://t.co/sd253afmur

Somehow Kelley was able to pass a background check and obtain a rifle at Academy Sports & Outdoors in April of 2016? Yet, I’m sure the search for answers on that front will be buried or lost by the incoming bout of explosive gun control diarrhea from the Left. If they want to push for more background checks, they should know that domestic violence convictions bar you from owning firearms. That provision has been on the books for quite some time. And there is no debate (or at least there shouldn't be) when you're convicted of beating your wife, girlfriend, or and in this case--your spouse and kids--you deserve to have your gun rights stripped.