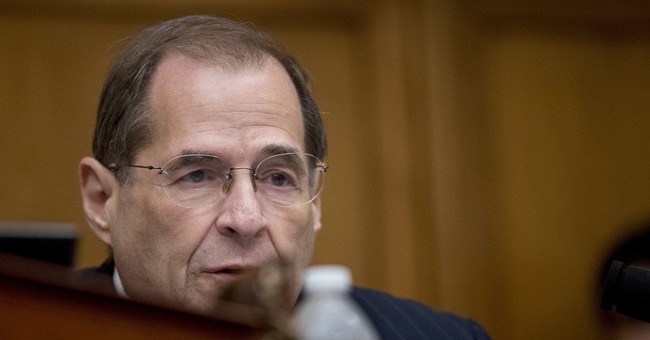 Well, we usually bash CNN here, as does the Trump White House, but today they get a gold star. They actually pushed back on a top Democrat who was spewing Russian collusion nonsense. Not that they’re also hoping to it to be true in order to impeach Trump, but with no evidence, they’re not going to allow people to present it as fact. CNN host Alisyn Camerota stopped Rep. Jerrold Nadler (D-NY), who is expected t0 helm the House Judiciary Committee next year, pushed back on his shoddy talking point about Russian collusion (via NTK Network):

“The significance of the developments this week is that one of the central focuses of the investigation is we have known it has become very clear that the Trump campaign colluded with the Russians in trying to subvert the election,” Nadler said.

“Wait, wait, wait. Hold on a second,” Camerota interjected. “How can you say that so definitively, that they colluded?”

Nadler seemed surprised a Camerota’s pushback and stuttered before attempting to defend his claim.

“The fact that [Paul] Manafort and [Donald] Trump, Jr. met with Russian agents, who told them they wanted to give them dirt on Hillary as part of the Russian government’s attempt to help them, and that they said fine,” Nadler responded. “It’s clear the campaign colluded, and there’s a lot of evidence of that. The question is was the president involved, and did he know about it?”

President Trump’s former attorney Michael Cohen pleaded guilty to lying to Congress, another charge brought before by the Mueller investigation, which set off Speculation Theater within the mainstream media. It’s the same old nonsense. There is zero evidence that Russia and the Trump campaign colluded during the 2016 election. The game hasn’t changed. It’s just that the media has become experts at polishing turds, or better yet, serving up complete and total nothingburgers with regards to this conspiracy theory.

Indeed. And every one of them (outside of unprosecutable foreigners, and Richard Pinedo) unrelated to Russian meddling in our elections. https://t.co/3aWm8KDLYi