Trump On Pelosi Speakership: She Can Always Call On Me If She Needs Votes, ‘I Would Perform A Wonderful Service For Her’ 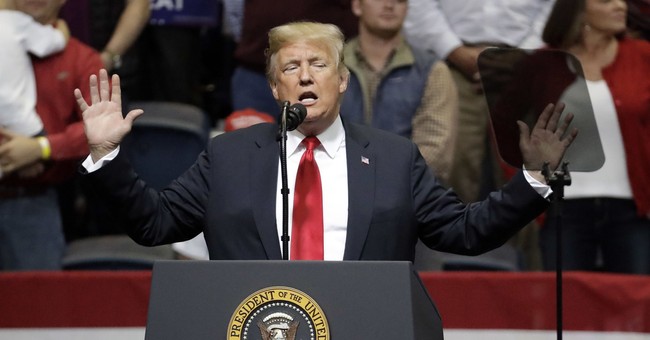 Rep. Nancy Pelosi (D-CA) is unfazed by the significant amount of newly elected Democrats that have vowed to not support her bidto become the next Speaker of the House. Pelosi is eager to regain control of the gavel ever since she lost it in the 2010 Tea Party wave. As of now, it’s possible that there are enoughNever Nancy Democrats that can block her bid. And yes, some new Democrats are afraid of retribution if they don’t back her. Pelosi has decided to take the ‘vote for me because I’m a woman’ route in the face of growing opposition. In true fashion, President Trump has decided to expertly troll the Democratic heartburn over this possible leadership bloodbath, saying Nancy can always count on him to whip some votes n her favor. She deserves it, and that he would do the most wonderful job God has ever created in getting her the votes. He would do a wonderful job at that—believe me (via The Hill):

I can get Nancy Pelosi as many votes as she wants in order for her to be Speaker of the House. She deserves this victory, she has earned it - but there are those in her party who are trying to take it away. She will win! @TomReedCongress

"I can get Nancy Pelosi as many votes as she wants in order for her to be Speaker of the House. She deserves this victory, she has earned it - but there are those in her party who are trying to take it away. She will win!" Trump tweeted.

Trump's comments come as Pelosi works to lock down the necessary support to take the Speaker's gavel when Democrats take over control of the House in January.

Pelosi is facing a potential challenge from Rep. Marcia Fudge (D-Ohio), a former chair of the Congressional Black Caucus who has joined other Pelosi critics in arguing that midterm voters sent a message of change for Washington that includes overhauling the party's leadership team.

Fudge and Pelosi met on Friday in the Capitol for a "candid" discussion, with the Ohio Democrat saying afterward that she would decide on whether to launch a challenge to Pelosi after Thanksgiving.

President Trump: "I would help Nancy Pelosi if she needs some votes. She may need some votes. I would perform a wonderful service for her. I like her. Can you believe it? I like Nancy Pelosi." https://t.co/Tvh2xKtBNu pic.twitter.com/ZlsF108eWo

This is a good move. It’s entertaining. And Nancy Pelosi is one of the most unpopular politicians on the Hill. She’s even more radioactive than Trump in some parts of the country. She’s also yesterday’s news, the face of the old order that the more progressive, and younger, wing of the party wants to move on from, very much like the Clintons. Pelosi winning this race (and it looks like she will) could dampen the mood of enthusiasm and optimism emanating from the Left after the 2018 midterms. Okay—that might be a lofty assumption, but Pelosi back in action in the House would be good for GOP fundraising and political ammunition. She’s already off to a solid start, asking folks to clap…for pre-existing medical conditions. Two years of Nancy could mean a lot of money…and ammunition to use against the Democrats who clipped incumbent House Republicans in 2020.