GA GOV: Dem Senator Says If His Party Loses, It's Because The Republicans Stole The Election 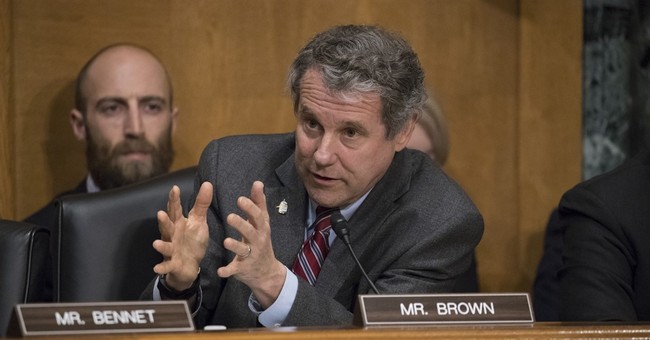 Hey, what ever happened to not questioning the legitimacy of elections because it could bring down the republic, or something? Well, Democrats thought they were going to win in 2016—and they didn’t. Now, in some key 2018 contests, some of their rising stars, like Democrat Stacey Abrams in Georgia’s gubernatorial race, fell way short. The reason: the GOP stole it. It’s irony in the extreme. It’s even richer given that to the south, Florida Democrats actually might have coordinated a scheme to actually steal an election. Sen. Sherrod Brown (D-OH) decided to get his ‘hey, I’m running for president in 2020’ sound bites in, explicitly stating that if Democrats lose in Georgia, it’s because the GOP stole it (via RCP):

They can't win elections but there are way more of us than of them. They can't win elections fairly; they win elections by redistricting and reapportionment and voter suppression. In all the ways that they try to scare people, particularly people of color how they make it hard for people on college campuses, especially community college where there are more low-income people and more people of color. We know those despicable laws are often aimed that way. We much make sure obviously that every vote is counted in Georgia and Florida and everywhere else.

This whole recount/ballot-counting fiasco that’s occurred south of the Mason-Dixon line has blown up almost every criticism lobbed at Donald Trump. First, when the elite media went nuts over Trump’s ‘I will accept the results of the election if I win’ was a total troll. He knew all of you in the liberal media were stupid enough to take him seriously, the delivery was semi-comical—and y’all fell for the bait. Now, we have Democrats saying the exact same thing—and without evidence of voter fraud.

For the GOP who alleges funny business in their electoral disputes, which were met with scrutiny from the Democrat-media complex, it’s sort of hard to argue that they don’t have a case when Democratic officials told staffers they could just share altered forms to correct mail-in ballots after Election Day, like in Florida. That’s a rather explicit example of electoral malfeasance. If anything, Brownie, your side is the band of liars, cheaters, and stealers. The Democratic Party is the rot of America—and the next two years are going to be vicious. The war is not over, Republicans. After we win these elections, reload, refit, and re-fix bayonets. The Democrats are coming after us.

This appears to be extremely troubling evidence of voter fraud, coordinated by Democrats, in order to steal FL elections. This would go beyond mere shadiness/incompetence — official forms were allegedly altered in order to get illegitimate votes counted. Investigate now. https://t.co/tQOi9CGIKz