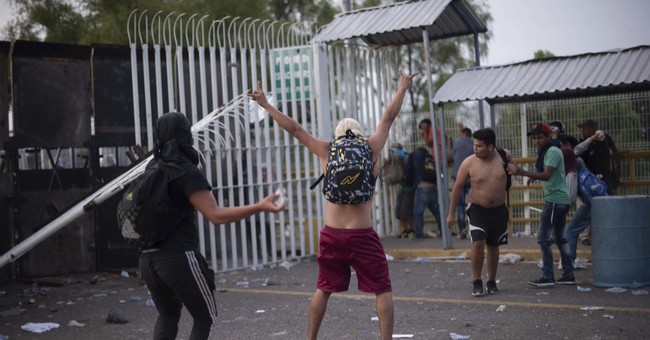 We’re back with another episode of Triggered, folks. We’re a week away from Election Day. The 2018 cycle is close. Forget the total trash polls that show Democrats with a near double-digit lead in the generic ballot. In the races the matter, the competitive districts, that will decide who controls the House, it’s statistically insignificant. Early voting GOP numbers are solid, a good gauge pointing to the GOP base being jacked up for this election, but so are Democrats.

The Senate is a different animal. It’s a GOP lock. The environment is terrible for Democrats, and it’s possible that the GOP could end up with 55 seats heading into the next Congress, the most since Bush was in office. In Arizona, a very competitive race, NBC had Democrat Kyrsten Sinema, whose campaign has an endless circus of crazy, with a six-point lead over Republican Martha McSally. But when you factor in the Libertarian candidate, Sinema’s lead is cut to three points. Oh, and the margin of error is five percent. It’s tied, though the headline would suggest a lock for Sinema.

New Jersey is the dark horse race to watch, with Republican Bob Hugin in a position to possibly pick off incumbent Democratic Sen. Bob Menendez, whose ethics troubles have depressed base turnout in the deep blue state. If Hugin loses, it’ll be the closest a Republican candidate has ever come to winning this seat since the 1970s. I think Bob still pulls it out but sub-eight points. Sen. Dean Heller (R-NV) looks like he could survive, despite hailing from a bluish state. If Heller, McSally, and Blackburn hold the line in Nevada, Arizona, and Tennessee respectively, and we win in North Dakota, Missouri, Florida, and Indiana, that gives us 55 seats.

We’ll be here all night on November 6.

In other news, the illegal alien horde is still marching toward the U.S.; we’re deploying over 5,000 troops to stop them. There’s now a second and more violent caravan filled with bad hombres that have used gasoline bombs against Mexican border police.

Veteran reporter Salena Zito, who has been covering the emerging neo-populist wave since 2012, said that you need to get out of the bubbles and view this election through the eyes of those who—shocker—decided the 2016 election. They like Trump fighting back and delivering uppercuts to the corrupt and liberal news media, especially during the vicious Supreme Court over Brett Kavanaugh’s nomination. This is why they sent him there. It was sweet…sweet validation.

At the same time, in wars, there are casualties. This week we had a cultural one. Apu, the beloved character from The Simpsons, will disappear from the series after some progressives found him to be problematic. Was it culturally insensitive, not that I give a s**t, or was it because Apu was a gun owner, hard-working business owner, legal resident, religious, and a loving father and husband? Sounds like a conservative, huh?