AZ Democrat Slams Stay-At-Home Moms: They're Nothing But Leeches 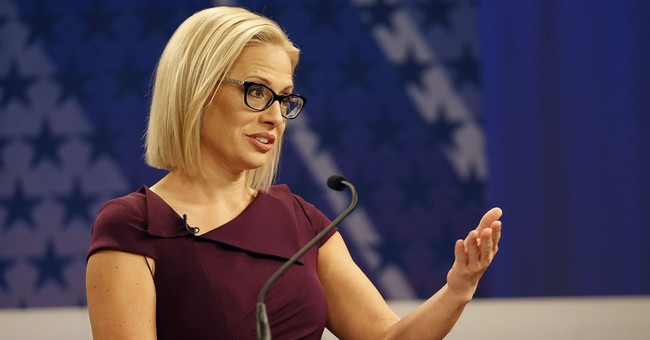 Arizona is trending blue. Sen. Jeff Flake (R-AZ) squeaked by in 2012, but he’s opting not to run for re-election due to abysmal approval numbers. It’s now Democratic Rep. Kyrsten Sinema and Republican Congresswoman Martha McSally duking it out to replace him. The race has been tight, though the vicious battle over Brett Kavanaugh and his Supreme Court nomination seems to have generated a surge of support for McSally who is leading by a solid six-points. It could be an outlier, but the bad news hitting the Sinema campaign has been pervasive in the final weeks. She stretched the truth about her upbringing; she called Arizona the crazy state and said it was the meth lab of Democracy; she tried to summon witches to protest the Iraq War. It’s a mess. Now, she’s going after stay-at-home moms for “leeching off their husbands.” Bre Payton at The Federalist has more:

Democratic Senate candidate Kyrsten Sinema, of Arizona, once described stay-at-home moms as leeches in a 2006 interview.

“These women who act like staying at home, leeching off their husbands or boyfriends, and just cashing the checks is some sort of feminism because they’re choosing to live that life,” she told Scottsdale nightlife magazine 944. “That’s bullshit. I mean, what the f*** are we really talking about here?”

In an interview with KTAR on Wednesday, Sinema was asked if she considered herself a “proud Democrat,” a descriptor she balked at, insisting that she’s a “proud Arizonan,” and that she doesn’t think either political party is doing a good job.

So, she’s not a proud Democrat, she hates stay-at-home moms, tried to summon witches, and thinks her state is full of crazy meth heads. It seems the middle of the road and rational Sinema was never real. Then again, Democrats seldom are who they say they are. To liberals, we once again see that feminism is something that they feel is only meant for them. That's fine. These folks are the most miserable people on the planet. The Left can keep them.