Democrat Kyrsten Sinema Continues Her Hate For Arizona, Says the State is the 'Meth Lab' of Democracy 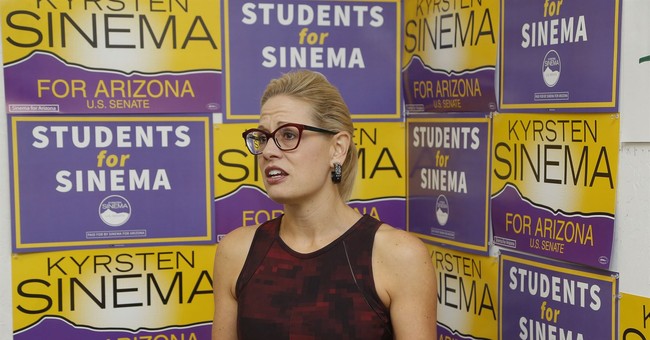 It's been quite the week for Democrat Congresswoman Kyrsten Sinema, who is running for Republican Jeff Flake's Senate seat.

First, she was exposed for comparing illegal aliens crossing the border to U.S. soldiers killed in Iraq. Then, we found out she called Arizona residents "crazy." Now, another unearthed video shows Sinema calling Arizona the "meth lab" of democracy. The comments were made at the far left conference Netroots Nation in 2010.

Sinema's opponent, U.S. Airforce veteran and Republican Congresswoman Martha McSally, is all over it.

So is the RNC:

Democrat Kyrsten Sinema protested US troops in a pink tutu.

She says stay-at-home moms are “leeching off of their husbands.”

She has no business representing Arizonans in the Senate. #AZSenpic.twitter.com/TlBYEVXwkA

A tip for Democrat candidates in tight races...

If you want to win, it's not advisable to call your state "crazy"!