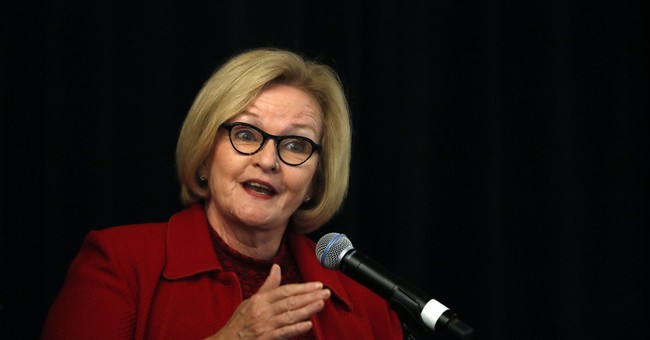 Is it shocking? No, not really. These are politicians—and politicians lie. But when you’re one of the most vulnerable Democrats running for re-election, it’s probably best not to say you’re for gun bans in a deep red state that broke heavily for Trump in 2016. Sen. Claire McCaskill and other red state Democrats are usually pro-gun rights, bucking the Democratic Party’s anti-gun orthodoxy. McCaskill, along with Sens. Tester (D-MT), Manchin (D-WV), Donnelly (D-IN), and Heitkamp (D-ND) all come from pro-Trump, pro-gun, and pro-hunting states. Supporting an agenda that seeks to curtail Second Amendment freedoms is a gamble. Pro-gun rights supporters vote, anti-gunners don’t—and that could be the difference between securing another term and heading back into the private sector.

On McCaskill, Project Veritas’ undercover video showed the Democratic senator voicing support for the far left’s anti-gun agenda, including a ban on semi-automatic rifles, which a staffer confirms is a position she supports, but can never voice publicly (via Project Veritas):

MCCASKILL: “Well if we elect enough Democrats we’ll get some gun safety stuff done. They won’t let us vote on it, we’ve got 60 votes for a number of measures that would help with gun safety, but McConnell won’t let ’em come to the floor.”

MCCASKILL: “Universal background checks, all of that… But if we have the kind of year I think we might have I think we could actually be in a position to get votes on this stuff on the floor and we’d get 60 [votes]…”

JOURNALIST: “So you would be on board with the bump stocks and… high capacity mags.”

MCCASKILL: “Of course! Of course!”

Despite her strong views on gun control, Senator McCaskill does not tend to promote them on the campaign trail or on her website. Rob Mills, who works on Senator McCaskill’s campaign, says that is “…because she has a bunch of Republican voters.”

Another individual who works on Senator McCaskill campaign, Carson Pope, adds that “…a semi-automatic rifle ban is more so what she would support.”

According to Mills, Senator McCaskill conceals her support of Moms Demand Action, a gun control group, and other similar organizations because they would “…hurt her ability to get elected.”

MILLS: “But she doesn’t openly go out and support groups like ‘Mom’s Demand Action’ or just like other groups that are related to that. Because that could hurt, her ability to get elected. Because people like see that and they’re like well I don’t want to support her even though they stand for the same policies…”

MILLS: “She’s worked out stuff with Mom’s Demand Action to make sure that she can support their goals without supporting the organization openly. And you know, Mom’s Demand Action does the exact same thing. Like a lot of our volunteers are actually from there. She’s really good about strategy and making sure she has a goal and can get there.”