GOP Senator: My Wife Received A Text With A Beheading Video After Kavanaugh Vote 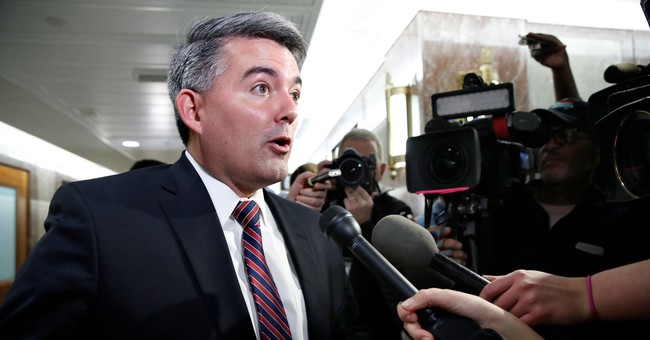 The fight to confirm now-Associate Justice Brett Kavanaugh was one of the most intense knife fights of the Trump presidency. It didn’t seem it would be going in this direction a couple of weeks ago. He had two days of hearings that were dotted with unhinged protesters shouting nonsense, which delayed the proceedings, but everything looked in order for a smooth confirmation. Then, three sexual misconduct allegations were lobbed against him.

All three accusations were without evidence or corroborating witnesses. The final vote was delayed a week so that the FBI could investigate these claims further, which Sen. Jeff Flake (R-AZ) pushed for, siding with Democrats that caused the GOP base a lot of heartburn. In the end, the FBI report noted what we’ve already known—no corroborating evidence. Kavanaugh was confirmed by a 50-48 vote.

For both sides, the grassroots activism has been pervasive, incessant, and aggressive. In one nasty case, Sen. Cory Gardner’s (R-CO) wife was texted a graphic video of a beheading. This person also doxxed members of his family as well (via Fox News):

In the wake of his vote to confirm Supreme Court Justice Brett Kavanaugh on Saturday, Republican Sen. Cory Gardner, R-Colo., revealed to Fox News on Sunday that his wife had received a graphic text message with a video depicting a beheading, and that someone has publicly posted the names and addresses of his family members.

Gardner announced his support for Kavanaugh in July, and reaffirmed it after reviewing the supplemental FBI report into uncorroborated sexual misconduct allegations against him.

Late last month, Gardner received a letter from an anonymous individual apparently in Denver, alleging that Kavanaugh had "shoved" someone up against a wall "very aggressively and sexually" during an outing in 1998 in front of four witnesses. The allegation was later deemed not to be credible.

The apparent intimidation efforts follow reports from Capitol police that the Democratic congressional aide accused of publishing the private information (known as "doxxing") of at least three Republican lawmakers last month also allegedly threatened to leak senators’ children's health information if a witness told anyone about his activities.

According to a sworn statement by Capitol Police Captain Jason Bell, a witness saw Cosko at a computer in a senator’s office, where he used to work, a day after two other unnamed senators' information had been put on Wikipedia. Cosko worked for other Democratic senators including Sen. Dianne Feinstein, D-Calif., Sen. Maggie Hassan, D-N.H., and former Sen. Barbara Boxer, D-Calif. While earlier reports identified Cosko as an intern for Jackson Lee, his lawyer said that he was working as a fellow in her office, paid by an outside institution.

Like we said before, this is war. This is a street fight. You have to fight back, and you cannot allow the social justice warrior Twitter mob to break you. There will be a sense that maybe we can be friends and come together with Democrats—don’t. Show no mercy for you shall receive none. Also, we’re 29 days from Election Day, so keep those bayonets fixed.

He’s not a “survivor” he’s an accomplice.

Senior editor at @RawStory mocking a man who was targeted for political assasination, battled from within an inch of his life and still lives with daily pain from being gunned down by a violent radical leftist.

And guy in charge of @rawstory mocks him for calling for civility. https://t.co/QRnSnEjvcC