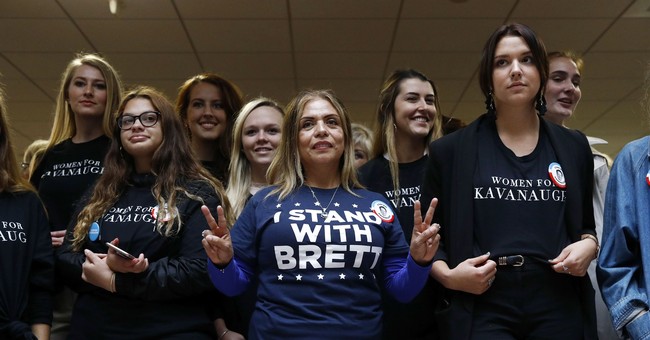 The Democratic Party is the one that supports women, is for women, and is fighting for their rights. And yet, some of their biggest supporters in business and media are absolute pigs.

Look at disgraced former New York Attorney General Eric Schneiderman, former CBS News Executive Les Moonves, and of course, former Hollywood media mogul Harvey Weinstein. There was JFK, Ted Kennedy, and Bill Clinton. All parties above treated women like garbage. They’re sleaze. Yet, it surely helps to keep news of the Left’s sleaze to a minimum when they control Hollywood and the elite news media. Also, and this is not a shocking point, women are not stupid. They’re not a uniform voting bloc. And they can think for themselves.

Despite what liberals and the liberal news media might think, the female vote is hardly the sisterhood of the traveling pants. There are liberals, conservatives, moderates, gun-owners, gun-haters, pro-choicers, pro-lifers, and national security-minded voters in this bloc. It’s diverse. And right now, the Left’s anti-Kavanaugh crusade has motivated Republican women the most.

President Trump nominated Brett Kavanaugh to fill the vacancy left by Anthony Kennedy. It looked fine. The confirmation was going smoothly, and then Christine Blasey Ford, Deborah Ramirez, and Julie Swetnick came forward—well, Democrats leaked Ford’s account—and the whole process was thrust into chaos. All three allegations are without evidence or corroborating witnesses. Still, Democrats pounced. They kept their powder dry and took what they thought was a kill shot. They can knock off Kavanaugh, animate their base for the 2018 midterms, and finally retake Congress and start their impeachment campaign against the Trump administration.

The Left appears to be overreaching. They’ve surely animated their side, but all you need to do is say “Trump,” and the mouths of liberals froth with rage. Yet, this character assassination of a man who has already undergone six, now seven, FBI investigations that have turned up zilch in terms of confirming if he’s a sexual predator is striking a chord with Republican women. They’re infuriated over the unfairness of this whole episode. It’s a clown show. Also, the fact that Democrats dropped these allegations at the 11thhour doesn’t help dissuade people that this was a political hit job. It was. Now, new polling shows that not only has the Democratic voter advantages shrunk significantly, but Republican women are enthused to vote in 2018 than their Democratic counterparts (via Slate):

The accusations of sexual assault against Supreme Court nominee Brett Kavanaugh are widely perceived to be a boon to Democrats heading into the midterm elections in November. “The women of this country identify with Dr. Ford and will not forget what is happening here,” Neera Tanden, the president of the Center for American Progress, told NBC News over the weekend. “They are not angry, they are furious, and I expect the largest women’s turnout in a midterm—ever.”

In fact, however, the Kavanaugh spectacle seems to have evaporated the Democrats’ enthusiasm edge, according to a poll conducted Monday by NPR, PBS NewsHour, and Marist. In July Democrats were likelier, by 10 percentage points, to say the November elections were “very important.” That gap has now narrowed to a statistical tie. “The result of the hearings, at least in the short run, is the Republican base was awakened,” Marist head Lee Miringoff told NPR.

The change is particularly striking when comparing women in the two parties. Of all the cohorts measured by the poll (including Independent men and women), Democratic women are the only group to display less enthusiasm for the midterms this week than they did in July. Meanwhile, Republican women seem invigorated. In July, 81 percent of Democratic women said the November elections were very important, compared to 71 percent of Republican women. Now, Republican women are 4 percentage points likelier to view the midterms that way (83 percent to 79 percent). That’s a 14-point swing in female voters’ interest in the midterms—after the hearings, and in Republicans’ favor.

Emma Green had a good piece in The Atlantic about how Democrats appear to be yet again overreaching with their agenda. Not everyone likes it outside of the Acela Corridor, which is something you’d think they’d catch onto after their 2016 loss. Green interviewed dozens of Republican women who are downright enraged by how Kavanaugh has been treated throughout this process and are mobilizing to punish Democrats for it:

“Honestly, I don’t think I have ever been so angry in all of my adult life,” says Ginger Howard, a Republican national committeewoman from Georgia. “It brings me to the point of tears, it makes me so angry.”

In interviews with roughly a dozen female conservative leaders from as many states, this was the overwhelming sentiment: These women are infuriated with the way the sexual-assault allegations against the Supreme Court nominee Brett Kavanaugh have been handled. They are not convinced by Ford or any other woman who has come forward. They resent the implication that all women should support the accusers. And they believe that this scandal will ultimately hurt the cause of women who have been sexually assaulted.

Above all, these women, and the women they know, are ready to lash out against Democrats in the upcoming midterm elections.

A big source of conservative women’s anger about Kavanaugh seems to come from a fundamental sense of unfairness: They believe Kavanaugh was convicted in the court of public opinion before he ever had a chance to defend himself. Howard told me that every cable-news network seemed strongly biased against the judge: She was watching NBC at a work event, and “the anchors … were just praising this woman like she was the next Rosa Parks or something,” she says. “I mean, I was screaming at the TV.”

Last week’s hearing was not part of a criminal investigation, “but you sure wouldn’t know that from watching,” says Smith, the Indiana activist. The 62-year-old calls herself “a Mike Pence girl to the max”; she got involved in political advocacy after she finished homeschooling her five kids. “The presumption of innocence … is something I taught my children,” she told me. But she, along with other women, thinks that privilege has not been afforded to Kavanaugh. “The media and the Democrats have totally flipped the narrative,” as Howard put it. Kavanaugh “is guilty until proven innocent.”

The women I interviewed, however, resented the notion that people’s accusations should be believed on the basis of their identity alone.

And now, even some Democratic strategists are worried that their side has overplayed their hand and created an environment that is better suited for GOP voters (via Daily Beast):

With Brett Kavanaugh’s confirmation to the Supreme Court looking more likely, some top strategists in the Democratic Party have begun warning members to quickly move off the nomination after it comes up for a vote.

Accusations that Kavanaugh sexually assaulted a woman in both high school and college have galvanized progressives and led to a growth of online donations to Democratic candidates. But there are growing fears among Democrats that the epicenter of the national political conversation has moved away from more friendly terrain and that Republicans have become mobilized by the Kavanaugh fight in even more dramatic ways.

“The truth is that in nationalized elections—most of which are presidential but some of which can be midterms—if the dominant issue terrain is around the cultural sphere, Democrats lose,” said Kenneth Baer, a former Obama administration official and founder of Crosscut Strategies, LLC. “I cannot think of any election in the postwar period where Democrats have won when that was the case.”

For the first time since the Kavanaugh accusations surfaced, a fissure has become apparent within the Democratic ranks over what the best political strategy is moving forward. While Baer said he was heartened that Democrats were still running their campaigns on economic issues, he and others expressed fear that the party was becoming too consumed by the Supreme Court fight.

During the 2016 campaign, Baer argued in a much discussed op-ed that Hillary Clinton had allowed herself to be roped into fights with Trump over gender, race, and sex when she should have portrayed him as a phony populist and bumbling plutocrat. Ultimately, a small sliver of voters in three key battleground states appeared to buttress that theory. The Kavanaugh debate, he warned, was leading Democrats down a similar path.

“My concern is that the biggest story that the entire country is focused on is Kavanaugh and the issues that his nomination has arisen,” he explained. “Yes, we should oppose him for many reasons. Yes, he should be investigated. But the politics of it are that if that becomes the overwhelming narrative going into the election, it could hurt Democrats.”

Democrats could find out, in a particularly brutal fashion, how toxic identity politics can be if the GOP votes in decent numbers come November. Let’s make that happen.

UPDATE: With today's cloture vote and other announcements, Sens. Flake, Collins, and Manchin are voting to confirm Kavanaugh. That's the game, folks. He has the votes to be confirmed.