After Ex-Boyfriend Nuked Her Testimony, Did Christine Blasey Ford Lie Before Congress? 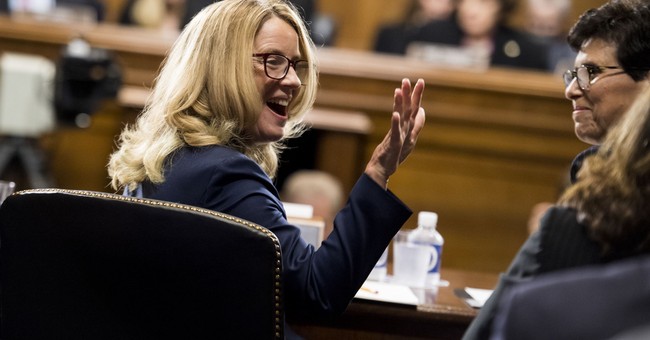 As a research psychologist, we shouldn’t be shocked that Christine Blasey Ford probably could figure out how to beat a polygraph test. Okay—maybe not beat per se, but certainly know how to calm someone enough to not set anything off during questioning. A new letter submitted to the Senate Judiciary Committee by Ford’s ex-boyfriend seems to have contradicted parts of her testimony before Congress last week. As a result, Sen. Chuck Grassley (R-IA), the chair of the Senate Judiciary Committee, has demanded Ford’s lawyers turn over her therapist notes from 2012, where Ford allegedly first detailed her attempted rape allegation against Judge Brett Kavanaugh, Trump’s Supreme Court nominee. The ex-boyfriend, who dated Ford for six years, also said that she never spoke about the alleged encounter with Kavanaugh. Fox News has more:

In a letter released Tuesday, an ex-boyfriend of Christine Blasey Ford, the California professor accusing Brett Kavanaugh of sexual assault, seemingly contradicted her testimony under oath last week that she had never helped anyone prepare for a polygraph examination.

The former boyfriend, whose name was redacted, also said Ford neither mentioned Kavanaugh nor said she was a victim of sexual misconduct during the time they were dating from about 1992 to 1998. He said he saw Ford helping a woman he believed was her "life-long best friend" prepare for a potential polygraph test. He added that the woman had been interviewing for jobs with the FBI and U.S. Attorney's office.

He also claimed Ford never voiced any fear of flying and seemingly had no problem living in a small apartment with one door -- apparently contradicting her claims that she could not testify promptly in D.C. due to a fear of flying, as well as her suggestion that her memories of Kavanuagh's alleged assault prompted her to feel unsafe living anywhere without a second front door.

In a pointed, no-holds-barred letter Tuesday evening that referenced the declaration, Senate Judiciary Committee Chairman Chuck Grassley demaned that attorneys for Ford turn over her therapist notes and other key materials, and suggested she was intentionally less than truthful about her polygraph examination during Thursday's dramatic Senate hearing.

"Your continued withholding of material evidence despite multiple requests is unacceptable as the Senate exercises its constitutional responsibility of advice and consent for a judicial nomination," Grassley, R-Iowa, wrote.

…In his declaration, the ex-boyfriend wrote that, "I witnessed Dr. Ford help [her lifelong best friend] prepare for a potential polygraph exam" and had "explained in detail what to expect, how polygraphs worked and helped [her] become familiar and less nervous about the exam," using her background in psychology.

Ford is the first woman to come forward with allegations of sexual misconduct against Kavanaugh. She alleges that a drunken 17-year-old Kavanaugh tried to rape her at a high school party. Yet, like the two other women who have come forward, Deborah Ramirez and Julie Swetnick, there is no evidence or corroborating witnesses. Swetnick alleges that Kavanaugh was part of a gang rape ring in high school. Ramirez alleges he exposed himself at a party at Yale. Ford cannot remember who hosted the party, how it came about, how she got there, and who took her home after the alleged account.

The FBI is investigating all three accusations after spineless Sen. Jeff Flake (R-AZ) decided to side with Democrats in advancing the nomination to the Senate floor, but delaying the final vote for a week in order for the bureau to dig deeper into these accusations. It’s a delay game for the Democrats. Yet, from what has been detailed, all the allegations are all very thin. Certainly not enough to derail the nomination, but always expect the moderate Republican wing of the GOP to come in and flub the end game. Senate Majority Leader Mitch McConnell (R-KY) has declared a final vote is going to be held this week, as the FBI investigation is reportedly in its closing stages.

This is one piece of many regarding the three allegations against Kavanaugh—and the massive plot holes in the narratives for these accusations. Ford can’t remember key details. Ramirez isn’t sure if Kavanaugh was at the party where she was reportedly harassed. And Swetnick, the gang rape ring accuser, her story keeps falling apart. In fact, all of these allegations are shoddy beyond belief. The question is did Ford lie about this during her testimony. At face value, it looks like that’s the case for now. What say you?

Q: Have you ever had discussions w/ anyone on how to take a polygraph?
A: Never.

Q: I don’t just mean countermeasures - any sort of tips or anything like that?
A: No.

Q: Have you ever given advice to someone who was looking to take a polygraph?
A: Never.pic.twitter.com/swRLTAmwhq