Of Course, The Two Women Who Yelled At Spineless Jeff Flake Never Had Their Political Ties Exposed 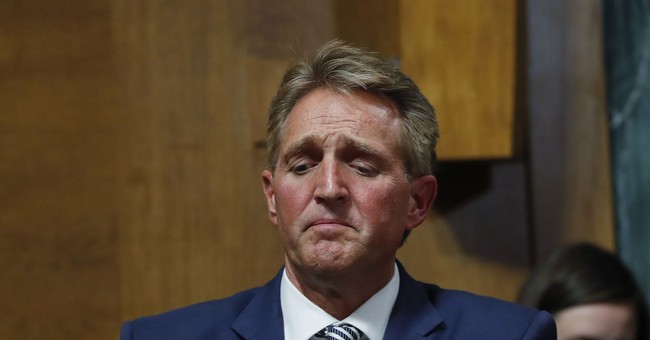 Beth wrote about this over the weekend. Remember the two women who confronted Sen. Jeff Flake (R-AZ) before he decided to play the role of Benedict Arnold and betray his party during the Senate Judiciary vote? These women screamed at him, which of course was blasted all over the media. Yes, CNN was all over it:

Then, Flake sided with Republicans to advance the nomination of Judge Brett Kavanaugh to the U.S. Supreme Court but requested a weeklong delay in order for the FBI to conduct a supplemental investigation into the string of sexual misconduct allegations that were lobbed against him. All three allegations were dropped at zero hour. All three lack corroborative evidence or witnesses. It has the makings of a political hit job carried out by the Left—and Jeff Flake decided to play Judas in that effort. His siding with Democrats only prolonged this brutal character assassination of an eminently qualified judge and good family man. Democrats will go to extraordinary lengths to destroy their enemies. We need to learn to do the same. Principle isn’t a shield anymore. It’s now something losers say to help them sleep at night when they’ve been outmaneuvered and beaten.

Yet, while everyone on the Left drooled over this video confrontation, did anyone bother to see where these two women, Ana Maria Archila and Maria Gallagher, work and what their motives were? Beth aptly noted they’re from a progressive group, Center for Popular Democracy, the organization that’s the point of the lance in the nix Kavanaugh crusade. One of the women involved in the confrontation, Ana Maria Archila, is the group’s executive director. She’s been busy in the trenches fighting for the Left—and right now; her group is nicely funded by left-wing billionaire George Soros (via NY Post):

Ana Maria Archila and Maria Gallagher were the two women who confronted Flake inside the elevator. Perhaps because they expressed such raw emotion, few media outlets dug into their political activism. Archila is an executive director of the Center for Popular Democracy; she had spent the previous week in Washington engaged in protests against Kavanaugh. Gallagher is a 23-year-old activist with the group. The center is a left-wing group heavily funded by George Soros’ Open Society Foundations. Indeed, as of 2014, Open Society was one of the three largest donors to the group.

Make no mistake. The Center for Popular Democracy is at the heart of the effort to stop Kavanaugh. A source forwarded to me an email sent from the organization: “Last week, you saw protestors interrupting the Kavanaugh hearings, trying to slow it down and show the Judiciary Committee how much they/we care. Those protests were organized by the Women’s March and the Center for Popular Democracy and other groups.”

Archila has another role beyond her duties as co–executive director of the center. She is also a member of the national committee of the New York-based Working Families Party. The WFP was founded in 1998 by the leaders of ACORN, the now-disbanded and disgraced group of community organizers.

I have no doubt that the vast majority of protesters who want to stop Brett Kavanaugh are sincere and are merely exercising their constitutional rights. But imagine if two women had cornered a Democratic senator in an elevator and demanded an investigation of who had leaked to the media Christine Blasey Ford’s letter alleging that Kavanaugh had sexually assaulted her. (Sen. Lindsey Graham said Sunday that he planned to investigate the leak.) There would have been sputtering outrage in media circles, and reporters would have breathlessly hunted down any ties between the women and outside groups.

This wasn’t an angry constituent run-in, which is not unusual on the Hill. It wasn’t some passionate protestor who had never dabbled in politics. This was a professional political ambush executed by Soros-funded operatives. Oh, yes, they’re doing a victory lap. The Washington Free Beacon’s Joe Schoffstall has more, including a rundown of Archila’s resume among the left wing progressive activist web (via Free Beacon):

The Center for Popular Democracy, a New York-based liberal activist group that receives the bulk of its funding from liberal billionaire George Soros and leads a massive $80 million anti-Trump network, is taking credit for the elevator confrontation last Friday that pushed Sen. Jeff Flake (R., Ariz.) to call for an FBI investigation into the accusations against Supreme Court nominee Brett Kavanaugh.

"Just a few hours ago, a courageous young woman and I confronted Senator Jeff Flake on an elevator about his statement that he would vote to confirm Brett Kavanaugh to the Supreme Court, the post reads. "In a now-viral video, Flake could not even look us in the eyes when we shared with him our experiences of sexual assault. He would not make eye contact with me when I asked him to think about my children, and his own children."

Prior to joining the Center for Popular Democracy, Archila was the co-executive director of Make the Road New York, a Latino group with more than 20,000 dues-paying members. Make the Road was founded in 1997 by Andrew Friedman, who is now the other co-executive director of the Center for Popular Democracy alongside Archila. Make the Road has received more than $25 million in taxpayer-backed government grants since 2002 with $400,000 going to the group as recently as last year, the Washington Free Beacon previously reported.

Make the Road and the Center of Popular Democracy, which are described as "sister" organizations, have passed hundreds of thousands of dollars between each other. The two groups have partnered on anti-Trump campaigns such as the "Corporate Backers of Hate" campaign that involved mass lobbying higher ups at companies that they said could profit from Trump policies.

Make the Road was behind the "spontaneous" protests at New York's JFK airport following Trump's Muslim travel ban. The group then led a "Delete Uber" campaign against the ridesharing company after they had continued to pick up passengers from the airport during the protests. Uber's CEO, Travis Kalanick, later stepped down from Trump's advisory council.

Make the Road was also behind the "Grab Your Wallet" campaign, which targeted retailers carrying Trump family products. Nordstrom ultimately pulled Ivanka Trump products but claimed they dropped the products over declining sales.

Should we be shocked? No. Did it seem staged from the outset? Yeah. Remember how spontaneous Occupy Wall Street was? It’s the same script. I know this has been said a million times, but maybe questioning these women and where they work would be key. No doubt they have the right to push their twisted agenda. No doubt they can confront our elected leaders. They sure picked the right one. But motives of these antics should be looked into. It’s a tall order with the Democrat-media complex, but a fact nonetheless. And this is in no way letting spineless Jeff Flake off the hook. He still screwed us over.