So Much Winning: We Have A New NAFTA Deal 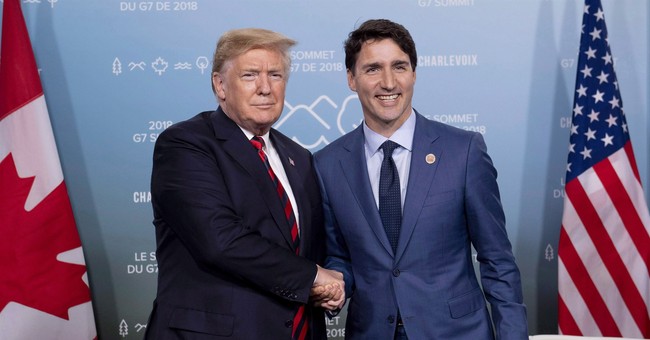 So, let’s go down the checklist here. We’re cutting regulations, have opened a denuclearization dialogue with North Korea, created over 3 million jobs, boosted U.S. worker pay to its highest levels in 10 years, unemployment is at an 18-year low, consumer and small business confidence are record highs, and over three million workers received bonus checks of $1,000 or more because of the Trump tax cuts. Second quarter economic growth is at 4 percent. There are now more jobs than job seekers. The economy is booming. And now President Trump is about to deliver on another campaign promise: a renegotiated trade deal. Yes, the North American Free Trade Agreement has been renegotiated—and Canada, which had been an obstacle, has finally signed off (via Politico):

The new pact, which is being called the U.S.-Mexico-Canada Agreement, is a major step toward completing one of Trump’s signature campaign promises and gives the president a concrete policy win to tout on the campaign trail this fall. It also sets the stage for what is sure to be a high-stakes fight to get the agreement passed by Congress before it can become law.

The Trump administration already formally notified Congress at the end of August of its plans to sign a new pact and faced a deadline of the end of September to provide a draft of the agreement.

U.S. Trade Representative Robert Lighthizer said in late August that officials are planning to sign with their Canadian and Mexican counterparts by the end of November — a date that would also satisfy Mexico, which is eager to have current President Enrique Peña Nieto sign the deal before his successor takes over Dec. 1.

People briefed on the outlines of a revamped deal described changes in language governing dairy imports, dispute resolution between countries, limits on online shopping that can be done tax free, and limits on the U.S. threat of auto tariffs.

“It’s a good day for Canada,” Prime Minister Justin Trudeau said as he left the office late Sunday night. He said he would save other comments for an official announcement on Monday.

A formal vote in Congress won’t be held until 2019, and it is still an open question whether lawmakers — including members of the president's own party who have often clashed with him on trade — will fall in line to support the deal.

This is so much winning. Now, the Trump White House needs to get back in the trenches and shore up votes for Judge Brett Kavanaugh's Supreme Court nomination, which has been placed in jeopardy after sexual misconduct allegations were lobbed at the judge. They’re all without witnesses or evidence. They’re baseless, but it’s created a circus on the Hill. Senate Majority Leader Mitch McConnell and Trump need to work to get this man on the high court. A left wing character assassination attempt cannot be allowed to succeed. Then, we can start getting tired of winning.