ICYMI: This Is When We'll Know If Joe Biden Is Serious About 2020 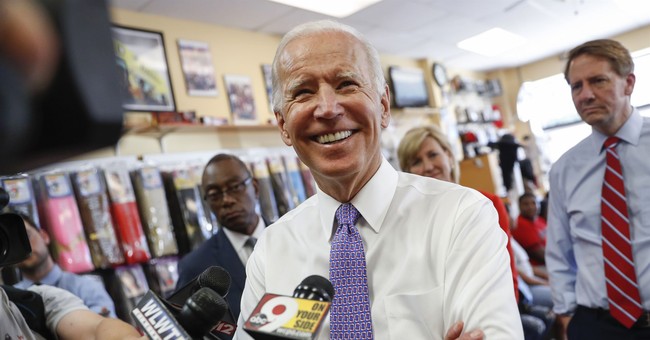 This might have flown under the radar, as the more loudmouth 2020 contenders have been fighting for airtime during the Brett Kavanaugh Supreme Court nomination hearings, but Vice President Joe Biden might be running for president. We’ll know in early 2019. Biden, who represented Delaware in the U.S. Senate since the early 1970s, has run twice and failed twice to clinch his party’s nomination. His first go at it resulted in a withdrawal after an embarrassing plagiarism allegation in which the then-U.S. Senator was accused of lifting passages very similar to that of then-Labour Party leader Neil Kinnock. The second attempt was in 2008, the titanic battle between Hillary Clinton and a then-no-name Illinois freshman named Barack Obama, who was sucking the enthusiasm and energy from everyone in the field in his juggernaut drive to the White House.

Now, it’s the Trump era. Democrats are embroiled in Russian hysteria and vicious attacks against the president and his supporters. Division and partisanship are at intense levels. Personally, I love this era. I know who my enemies are—and how did this so-called toxic political climate some say accelerate so fast? Maybe it’s due to the fact that both sides have long known that we cannot get along, we will never get along, and that culturally we couldn’t be more different. You see that’s what happens when you bury simple truths for so long. It festers until the infection cannot be contained or stopped.

Biden will be nearly 80 years old when 2020 rolls around. A good chunk of his party’s elite candidates—and I use that phrase loosely—will be prime candidates for retirement homes by then; the quintessential geriatric brigade leading the charge for higher taxes, looser borders, no more Immigration and Customs Enforcement, and impeaching Trump from their campaign headquarters inside a Scooter Store.

The younger crew doesn’t have the experience or name recognition, and they certainly have views that put them out of step with most voters outside of the cities. They’re also hemmed in by geographic rigidity; no one knows who the hell Sens. Kirsten Gillibrand (D-NY), Cory Booker (D-NJ), or Elizabeth Warren (D-MA) are outside of the Catskill Mountains, New Jersey, and the Boston suburbs respectively.

With Joe, he’s from Scranton, PA. He’s not one from the power elite that dominates his party, that being from the coasts or the liberal northeast. He’s one of the least wealthy officials in American public life. He does have white working class support. He could be someone who could deliver a speech that resonates with both sides.  Still, his age and the fact he was part of the establishment wing of the Democratic Party and a Washington tick will not bode well with the ascendant progressive wing of the Democratic Party, who want radical far left changes to the platform and the party’s ethos. Biden will soon find it difficult to marry winning a primary and finding ways to pivot to a general election mindset without coming off looking hypocritical, opportunistic, and nakedly political. He can’t run on the Bernie Sanders economic plan, and then moderate for example should he gain enough delegates. And even there, there are issues. The Democratic National Committee has clipped the powers of the superdelegates that were a buffer between rational and irrational; mainstream (or as close as you can get with this party) and total full-blown left wing whack job.

I think all of this is factoring into Biden 2020. Still, I wouldn’t be shocked if he does toss his hat in the ring. The man has nothing to lose. He’s out of office; he was a U.S. Senator, and the former vice president of the United States. If it blows up, well, he’ll just go back to where he is now: retirement.

Shortly after Joe Biden boarded a recent flight from Washington to New York, a string of passengers began stopping at his seat in coach to deliver some version of the same message: Run, Joe, run.

“We’re with you,” one said, according to a Democratic strategist who happened to be on the plane and witnessed the scene. “You’ve got to do this,” said another.

Biden himself is more conflicted — but he is listening keenly to the supporters pushing him to run for the White House in 2020. Biden is convinced he can beat President Donald Trump, friends and advisers say, and he has given himself until January to deliberate and size up potential competition for the Democratic nomination, according to people who have spoken to the former vice president about his decision-making.

In the meantime, Biden diligently maintains a network of supporters in key states, a group 30 years in the making, while some of those competitors are still making introductions.

As he takes each careful step, Biden faces the same dilemma. For an elder statesman in a leaderless party, one who long envisioned himself in the top job, the pull toward another presidential bid is strong. But the 75-year-old former vice president must weigh the realities of jumping into a crowded primary full of up-and-comers eager to debate the future of the party.

Biden was also mulling a 2016 run, but opted against it, citing that the game clock had run out. Also, he was still mourning the death of his son, Beau, from brain cancer in 2015. With 2020, there will be a lot of Democrats, some sane, some not so sane, hoping to ride the anti-Trump anger into 1600. We’ll have a clearer picture once the exits are done from this critical midterm election.