Search And Destroy: Trump WH Hunts For Anonymous Official That Penned Resistance NYT Op-Ed...But Many Seem To Know Who It Is 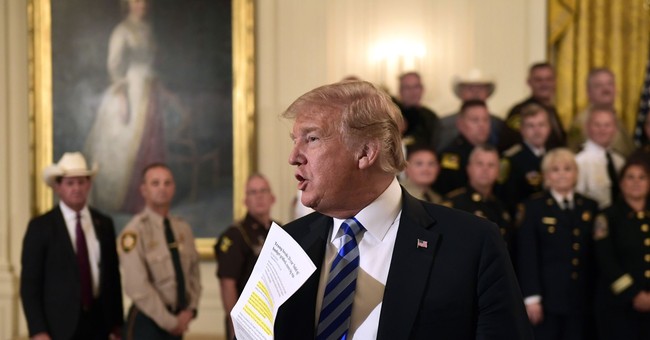 We have a mole, folks. Yesterday, The New York Times published an op-ed from a senior Trump administration official, who says he’s part of the resistance and will work to thwart parts of the Trump agenda. So, remember when liberals said all the deep state allegations were loco? Remember how it was just insane to suggest that government officials were doing things to hamstring this administration because they don’t like Trump, but also because they’re arrogant and self-righteousness.

Well, here you go.  A piping hot cup of shut the hell up. Evidence shows that we’re right, you’re wrong, and now we have to find this official and his crew. The op-ed was published anonymously, but it contained all the juicy bits to keep the condescending cancers of the country—Democrats—well sated in their bastions along the Acela Corridor. No doubt it was one helluva fix for these folks. But right now, the Trump White House is on a search and destroy mission for this official (via WSJ):

White House aides launched a search for the anonymous author of an opinion column who claimed Wednesday to be part of a secret group of officials inside the administration acting as a check on President Trump’s “worst inclinations.”

An angry president called the New York Times piece “a disgrace,” slammed its author as “gutless” and demanded that the Times reveal the identity of the author.

The writer was identified only as a senior administration official. A New York Times spokeswoman declined to comment when asked for a description of that term.

Inside the West Wing, top officials canceled afternoon meetings and huddled behind closed doors to strategize about how to expose the author, White House officials said. Some officials called reporters to chase down rumors about who was behind the op-ed, and whether it came from inside the White House or a cabinet-level agency.

The hunt for the anonymous writer came on a day when the White House was busy responding to the author of the latest critical book about the Trump presidency.

Coverage of the new manuscript from Bob Woodward, a Washington Post editor and author of a dozen best-selling nonfiction books, was being closely monitored by the president.

White House Press Secretary Sarah Sanders said this person should resign, though media circles and other Trump officials appear to know whom it might be already. It’s no one reportedly well known. Let’s see what happens. Fox News' Tucker Carlson said on his show last night that they have a pretty good idea who it is, but are waiting for full confirmation. They've reached out to the White House for comment.

Should also note that all of the NYT reporters I’ve spoken to so far are livid that the opinion side has chosen to run an anonymous op-ed. Puts them in a really tough spot https://t.co/81cvISiIP2

Have spoken to several White House reporters and senior administration officials...they all have an idea of who the writer is....and none of the guesses are famous names...but they’re powerful officials. https://t.co/iIYivymvuU

Fwiw, based on my experience with NYT sourcing rules for Administration officials, this person could easily be someone most of us have never heard of & more junior than you’d expect. Like a deputy at legislative affairs or NEC.

.@nytimes defends its anonymous Op-Ed: "We are incredibly proud to have published this piece, which adds significant value to the public's understanding of what is going on in the Trump administration from someone who is in a position to know."

texting all my sources “Congrats on your gig as a New York Times columnist!” until someone says thank you

RE: the NYT anonymous editorial. The federal government always has been honeycombed with officials resistant to this and all GOP administrations. They are government workers and nearly all Democrats. And don't be misled by the words "senior officials." There are loads of them.

On a side note, the op-ed was arrogant. We don’t need saving. Fox News’ Martha MacCallum aptly noted that no one elected this person, who has taken the mantle of coming to our rescue because President Trump is not to this person’s liking. I wouldn’t be shocked if it’s a Democrat. There are still scores of Obama holdovers, still bitter, still shell shocked, and undoubtedly would do anything to keep this White House from governing. Then again it could be a Never Trump Republican, who are equally nasty in their views of the president and his historic win.

D.C. is a den of snakes. In the meantime, the economy is growing, the military is rebuilding, consumer and small business confidence is at record highs, and unemployment is at an 18-year low. But somehow we’re in a constitutional crisis, the world is ending, and the ice caps are melting all because some guy named Donald J. Trump is president. Oh, and he’s going to remain president after 2020.

Thank you for confirming the existence of operatives within the government who are actively working to undermine and destroy @realDonaldTrump against the will of the people who lawfully elected him POTUS.

From today forward, any journalist, pundit or politician who ridicules concerns about a "Deep State" as a "conspiracy theory" should be dismissed as the lying hack that they are.

The media and Democrats and never Trumpers don't see how the #NYTimesOpEd actually helps @realDonaldTrump for the same reason they STILL don't understand how Trump won and how they got the election so damn wrong in the first place.