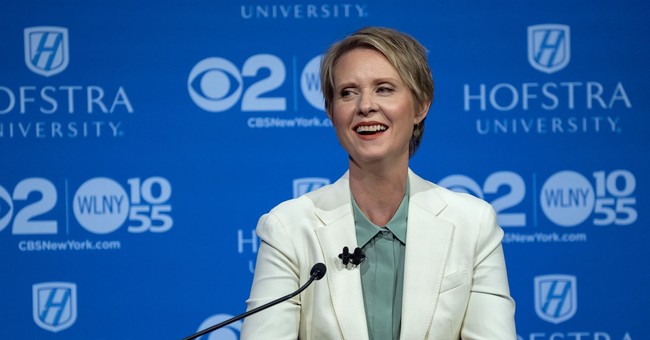 Cynthia Nixon, the former Sex and the City star, has a master plan to implement single-payer in New York: it’s nothing. Yes, it’s what you’d expect from a left wing personality running for office. It’s par for the course, however. Her counterparts, Bernie Sanders and Alexandria Ocasio-Cortez, have the same strategy. It sounds good. People like free stuff, also equality! By the way, the Sanders-Ocasio-Cortez agenda costs us $40+ trillion over the next decade and nearly $218 trillion over the course of thirty years. At the state level, it could be just as ruinous because Nixon wants to pass it, and then figure it out from there (via Fox News):

In her quest to become New York’s next governor, Cynthia Nixon has advocated for a single-payer health care system in the state – something studies have shown would be a costly endeavor.

The proposed New York Health Act (NYHA), which would establish universal health care for everyone in the state, including undocumented immigrants, would require the state’s tax revenue to increase by about 156 percent by 2022, according to a study by the RAND Corp. But it also found state spending on total health care under NYHA would be slightly lower – about 3 percent – by 2031 than under the current system.

Nixon recently told the New York Daily News editorial board she did not yet have a plan to pay for single-payer.

“Pass it and then figure out how to fund it,” Nixon said.

Gov. Andrew Cuomo, who Nixon is challenging in the Democratic primary next week, has said it should be up to the federal government to pass a universal health care system. During a debate between the two candidates last month, Cuomo said the NYHA was good “in theory,” but would cost more than New York’s annual budget to implement it “in the long-term,” according to the Albany Times Union.

California tried to do this, and they too had no mechanisms to fund their $400 billion initiative. California Democrats were the ones to nix the measure, spurring furious progressives to hurl hate and expletives their way. The Left ate their own in that fight. Deep down, I think the far left knows this is just not feasible, but it polls well, it puts the more establishment candidates, especially those who can’t argue their way out of a paper bag, like Cuomo, on edge, and it keeps the discussion alive. It pushes the party Leftward, it energizes the whack job slice of the base and increases their clout within the party. But the hard part is convincing moderates, independents, and maybe a couple moderate Republicans in the general election to jump on this shambles of a socioeconomic train. And they might not want to when they see the price tag, the amount in taxes that need to be raised to pay for all of these goodies, and the shoddy benefits that will be doled out from such increases.