The Wonders Of Socialized Medicine: Some Are Waiting Up To 62 Hours For An Ambulance In The UK 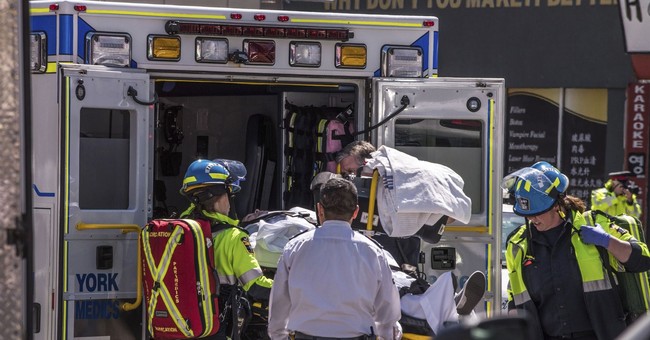 Folks, if we ever become taken over by the Bernie Sanders supporters and the Alexandria Ocasio-Cortez wing of the Democratic Party, take comfort in that we'll all be equal…in our sufferings together. The economic destitution that is to come from their agenda that will cost over $40+ trillion over the next ten years, with a $218 trillion in total over the next three decades. The Venezuela-ization of our country would occur. So, we get back to the far left’s favorite issue: health care. They slam the U.S. for not having a total trash health care system, like in Europe. Europe has socialized systems, they say. Good for Europe, I couldn’t care less. They also have immense issues. In the UK, the whole system is in shambles, with patient stacking occurring on a daily basis. The New York Times had a piece on it in January:

At some emergency wards, patients wait more than 12 hours before they are tended to. Corridors are jammed with beds carrying frail and elderly patients waiting to be admitted to hospital wards. Outpatient appointments were canceled to free up staff members, and by Wednesday morning hospitals had been ordered to postpone nonurgent surgeries until the end of the month.

Cuts to the National Health Service budget in Britain have left hospitals stretched over the winter for years, but this time a flu outbreak, colder weather and high levels of respiratory illnesses have put the N.H.S. under the highest strain in decades.

The situation has become so dire that the head of the health service is warning that the system is overwhelmed.

Some doctors took to Twitter to vent their frustrations publicly. One complained of having to practice “battlefield medicine,” while another apologized for the “3rd world conditions” caused by overcrowding.

Now, for some parts of the UK, it could take up to 62 hours to get an ambulance to come to your door. So, if you’re elderly, fall, and break your hip, you have to lie in agony for hours…because socialism (via BBC):

A patient waited 62 hours for an ambulance, while four trusts took more than 24 hours to respond to 999 calls, new figures have shown.

The longest delays in the UK were recorded by Welsh Ambulance Service, which kept four patients waiting for more than 50 hours.

A spokesman said the figures were "not typical" and "represent the extreme end of the waiting time spectrum".

The Patients Association said they were "extremely concerning".

Between June 2017 and June 2018, ambulances from four services took 24 hours to reach patients, including some with breathing and mental health problems.

The trusts said the longest waits were for "less serious calls", and they had to prioritise responding to people in life-threatening or urgent conditions.

Caroline Hardaker's mother Sylvia, 79, lay on paving stones in her back garden for three-and-a-half hours after falling and breaking her hip in High Wycombe.

She said: "I think I rang six times in the end, and each time they said they would have a clinician call back and then they didn't.

"It was so frustrating, just thinking 'how long are they going to take'? And my mum was going into shock, her arms were shaking. Her arm had gone numb.

"She was obviously cold because she was lying on a pavement.

Yeah, socialized medicine really sounds like the way we should go—yikes!