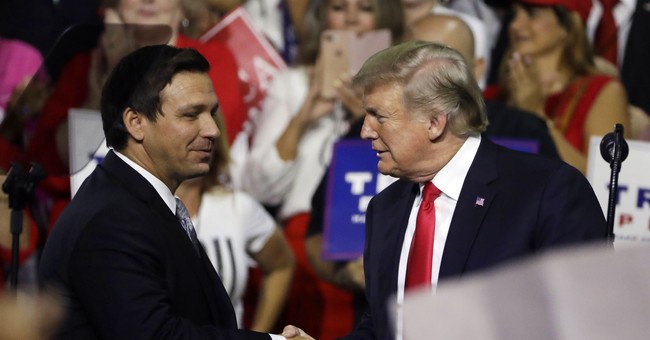 It’s Election Day in Florida, and it looks like Rep. Ron DeSantis has handily beaten Agriculture Commissioner Adam Putnam in the Republican gubernatorial primary. President Trump endorsed DeSantis. As of now, DeSantis leads Putnam 56/37—and for some, Trump’s endorsement made the difference, even beckoning some Putnam supporters to change sides (via AP):

With the backing of President Donald Trump and more than 100 appearances on Fox News under his belt, U.S. Rep. Ron DeSantis sailed to victory in Florida’s Republican primary for governor Tuesday, defeating a longtime favorite of the GOP establishment with a campaign based largely around the president.

DeSantis beat out Agriculture Commissioner Adam Putnam, who had seemingly built up the run for governor his entire adult life after being elected to office as a 22-year-old.

DeSantis was first elected to Congress in 2012, running as a Washington outsider. His television ads were Trump-focused, including one where his toddler stacks bricks while DeSantis exclaims, “Build the wall!”

The strategy worked, and many voters say that’s what convinced them to support DeSantis.

Sharon Grant said she was planning to vote for Putnam — until Trump weighed in on the race.

“I changed my vote when Trump supported DeSantis,” said the 67-year-old retiree from Pinellas County. “I also loved his commercial, the one with the kids.”

“I believe in Trump’s policies and while I don’t love the way he opens his mouth too much, sometimes saying things that are not quite appropriate, I do believe that in his heart he really means well. He’s doing things the way I like,” Parke said.

The Democratic candidate has yet to be announced, but does anyone remember Alan Grayson, the Democratic congressman who said Republicans wanted people to die during the Obamacare debate. Well, he tried to get back on the Hill this year, according to The Washington Post in May:

Alan Grayson, a liberal firebrand who ignited controversy during his previous tenure in Congress, has decided to run again for his old seat representing a district in Florida.

His decision sets up a showdown in the Democratic primary with Rep. Darren Soto, the first Florida congressman of Puerto Rican descent, who succeeded Grayson after he made an unsuccessful Senate bid in 2016.

Grayson, an unabashed liberal who once bragged that his supporters would be willing to “crawl naked over hot coals” to vote for him, said in an interview that he’s running again “because it’s what the people want.”

Projection: it's Andrew Gillum (D) vs. Ron DeSantis (R) for #FLGOV in November. Wow, what a turn of events.

Hard to see a path for Graham (D) at this point. Rarely have we seen fortunes turn so quickly moving from early to E-Day votes in a primary. #FLGOV

I take that back - Andrew Gillum (D) turning in a sensational Election Day performance. Not sure Graham (D)'s lead can survive Broward. #FLGOV

In fact, I'd rather be Gillum (D) at this point. #FLGOV

Well, he lost. As for the Democratic gubernatorial nominee, Rep. Gwen Graham was the supposed favorite, but Cook Political Report’s David Wasserman projects Tallahassee Mayor Andrew Gillum, who was backed by Bernie Sanders, to clinch the nomination. Gillium reportedly did not mount much of a media campaign, but got solid support among the state's progressive base.

In Arizona, Sen. Jeff Flake, a frequent critic of President Trump, opted not to run for re-election, pitting Rep. Martha McSally, Kelli War, and Joe Arpaio in the fight to see who will be selected to hold the state for Republicans this cycle. McSally trounced her competition, clinching 51 percent of the vote, followed by Ward with 28 percent, and Arpaio who received 20 percent. McSally now faces Rep. Kyrsten Sinema in the general. This is not a slam-dunk race. Keep an eye on this one; Democrats could pick it up (via NBC News):

Rep. Martha McSally handily defeated former Sheriff Joe Arpaio and Kelli Ward in the Arizona Republican Senate primary on Tuesday night, setting the stage for a November battle over a seat that could determine control of the Senate, NBC News projects.

McSally, a former fighter pilot, had been favored to prevail over the two conservatives, who split the anti-establishment vote. But McSally tacked to the right in the primary, which could cause problems for her in what is expected to be a tough race against Democrat Kyrsten Sinema in November.

Republican officials had worried that Ward or Arpaio would be unelectable in November, potentially costing the GOP a Senate seat. Despite both of the challengers accusing McSally of being too moderate, she's on track to win more votes than both of her challengers combined.

Ward lost a nasty primary against Sen. John McCain in 2016, and returned this year to challenge Sen. Jeff Flake, R-Ariz. But when Flake decided not to run for reelection and Arpaio got in, Ward had a tougher time consolidating the pro-Trump conservative vote. President Donald Trump did not endorse in the race.