Ben Shapiro Challenged Alexandria Ocasio-Cortez To A Debate. She Accused Him Of 'Catcalling.' 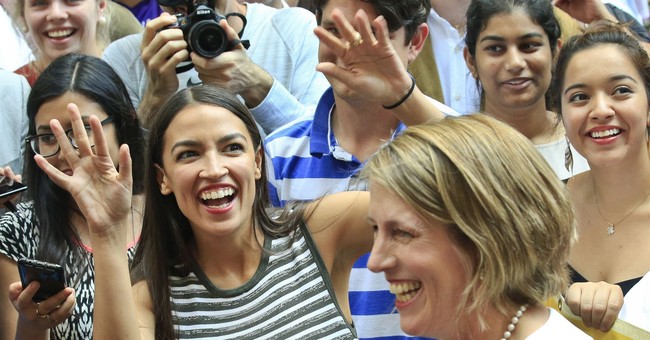 Conservative commentator Ben Shapiro had a modest request of Alexandria Ocasio-Cortez: let’s have a debate. It would pit the rising left wing darling of the Democratic Party versus one of the leading voices in the conservative movement. Debates shouldn’t be strange to either party. Shapiro has debated liberals; even the most die-hard casts on America’s college campuses. Ocasio-Cortez debated Rep. Joe Crowley, a top Democrat who she challenged and beat in an upset primary challenge. What’s the harm? It’s a battle of ideas, right? (via Fox News):

Conservative commentator Ben Shapiro challenged democratic socialist Alexandria Ocasio-Cortez to a debate, offering to donate $10,000 to her campaign if she accepted -- but it triggered a sparring match online.

Shapiro initially tweeted a video on Wednesday in which he mocked Democratic National Committee chairperson Tom Perez for calling Ocasio-Cortez, a New York congressional candidate, the “future of the Democratic Party,” before issuing his challenge.

“Miss Ocasio-Cortez, I’m really excited that you’ve been elevated to that position and I would love to have a real conversation with you about the issues. You’ve noted that you think Republicans are afraid to debate you or talk to you or discuss the issues with you,” Shapiro said.

“Not only am I eager to discuss the issues with you, I’m willing to offer $10,000 to your campaign, today, for you to come on our Sunday special,” he continued. “We can have an hour long conversation about all the topics under the sun, really probe your belief system.”

Just like catcalling, I don’t owe a response to unsolicited requests from men with bad intentions.

And also like catcalling, for some reason they feel entitled to one. pic.twitter.com/rsD17Oq9qe

Me: PEOPLE ARE TERRIFIED OF ME AND MY IDEAS.

Man: I challenge you to a debate about those ideas.

Me: STOP CAT CALLING ME.

Okay fine @Ocasio2018, if you won’t debate @benshapiro because he’s a man (and because he would destroy you intellectually) how about a debate with me? https://t.co/y4m2mkLbVt

A baseless, explicitly motive-impugning accusation of sexism to avoid a debate. Unsurprising but still so weak. https://t.co/x1Duptdpc3

Catcalling must mean something different in Queens.

"Hey, girl -- want to have a public one-hour discussion on the intricacies of trade policy, deficit spending, and the value of the profit motive? I'll even donate a bunch of money to charity or your campaign to make it happen." -- Construction worker in Queens, apparently

Crying sexism in order to avoid a debate of ideas is not a feminism I want any part of.

Shapiro now says that $10,00 will be given to a charity of Ocasio-Cortez’s choice. She responded by saying that this request was akin to catcalling.

“Just like catcalling, I don’t owe a response to unsolicited requests from men with bad intentions,” she tweeted.

Yeah, it’s not—and you’re a public figure so be prepared to be ripped apart every day. This is what you signed up for—and yes, debates are something you do when you run for office or want to change minds in your left wing revolution you’re trying to get going. Then again, when think tanks dole out studies that show the far left’s agenda price tag soars into the tens of trillions, I can see why they wouldn’t want to have a debate. I think we all know Shapiro would have wiped the floor with Ocasio-Cortez. It would have been brutal. So, we lost a chance at seeing Shapiro deliver an epic smack down to leftism. That’s fine. Ocasio-Cortez keeps stepping on rakes. She’s only saved by the fact that she’s from a deep-blue slice of New York City. Shapiro did some fun with her response.