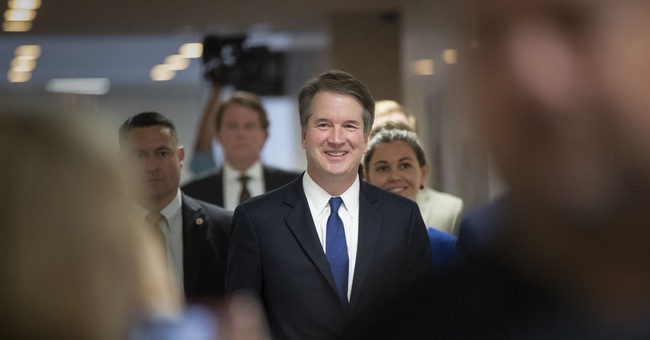 Lisa Blatt is an attorney who has argued 35 cases before the Supreme Court. She works at Arnold & Porter, one of the largest law firms in the world.  She’s a liberal, a feminist, and a Democrat. She also wants to see her colleague Judge Brett Kavanaugh confirmed to the Supreme Court. With Justice Anthony Kennedy enjoying retirement, there’s a vacancy. Kennedy announced he was heading off into the sunset shortly after the end of the 2017 SCOTUS term. Trump then nominated Mr. Kavanaugh to fill his vacancy, positioning conservatives to have a solid majority on the Court for the next generation.

Democrats trembled. The meltdown was epic. Right now, the Left thinks the world will end if Kavanaugh is confirmed. Trump will become king. And all women will be relegated as a slave race because Roe v. Wade will be overturned. Actually, that’s the only thing they care about. So, how does Blatt reconcile this fear? Well, she feels that whatever decision Kavanaugh makes on Roe, if it makes it to the Court, will be done because “he believes the Constitution requires that result.” This is brave, folks. Not only that, she says Kavanaugh’s record is not an issue because it’s beyond reproach. He’s the most qualified for the job, and she noted that Kavanaugh felt that his colleague Judge Merrick Garland was also supremely qualified to be a Supreme Court justice. She also adds that Democrats should stop the “unbecoming” attacks on Kavanaugh. Everyone knows why Democrats are attacking him, so they should just stop insulting our intelligence. She wrote it all down in an op-ed for Politico:

…unless the Democrats want to stand on the principle of an eye for an eye—and I don’t think they should—folks should stop pretending that Kavanaugh or his record is the issue. He is supremely qualified. Although this fact is distressing, Republicans control both the White House and Senate. In comparable circumstances, when President Barack Obama was in office, our party appointed two justices to the Supreme Court.

I first met Kavanaugh in 2009, shortly after I left the Solicitor General’s Office. He spontaneously emailed to say he liked an article I had written for The Green Bag, an irreverent legal magazine, about my experience arguing in front of the Supreme Court. I had just started my own appellate practice, and his note was extremely thoughtful.

Months later, I asked Kavanaugh to join a panel at Georgetown Law School to review a film about college debate. He responded that he knew nothing about debate but nevertheless was happy to help. When a law student asked him how debate had shaped his career, he answered: “I actually never debated, but I did play football, and the two are basically the same.” He then offered this advice: “Practice, learn to get along with all of your teammates, learn from your mistakes, and have fun.” It was clear that judge cared about mentoring and teaching law students and was invested in helping others to succeed.

I do not have a single litmus test for a nominee. My standard is whether the nominee is unquestionably well-qualified, brilliant, has integrity and is within the mainstream of legal thought. Kavanaugh easily meets those criteria. I have no insight into his views on Roe v. Wade—something extremely important to me as a liberal, female Democrat and mother of a teenage girl. But whatever he decides on Roe, I know it will be because he believes the Constitution requires that result.

It’s easy to forget that the 41 Republican senators who voted to confirm Ginsburg knew she was a solid vote in favor of Roe, but nonetheless voted for her because of her overwhelming qualifications.

Democrats should quit attacking Kavanaugh—full stop. It is unbecoming to block him simply because they want to, and they risk alienating intelligent people who see the obvious: He is the most qualified conservative for the job.

Wow. Ms. Blatt probably will catch hell from her side for this, speaking warmly about Kavanaugh and saying he should be confirmed. This is anathema to a man who the Left thinks will bring about The Handmaid’s Tale universe. It’s unhinged. It’s wrong—but it’s refreshing to see die-hard liberals take a rational stance in this fight. The man is qualified. She even respects his decision, whatever course he takes, on Roe because of that experience, legal acumen, and interpretation of the Constitution. Where have these Democrats gone? Ms. Blatt should be given a hat tip for defending her colleague and stating the undeniable truth that Kavanaugh should be confirmed. On the other hand, she might have to change addresses to avoid the frothing, rabid outrage hordes that have engulfed the progressive Left.