Top Republican: We Can Go Around Speaker Ryan To Impeach Deputy AG Rosenstein 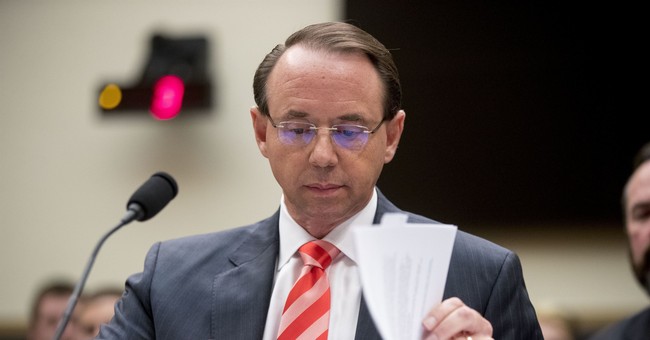 Last night, House Republicans filed articles of impeachment against Deputy Attorney General Rod Rosenstein. The Rubicon had been crossed. The fight between Congress and the Department of Justice over document disclosures has been simmering for months; with subpoenas reportedly being ignored concerning the Hillary Clinton email probe, alleged FISA abuses, and the firing of former Deputy FBI Director Andrew McCabe. It’s around 1.2 million pagesthat Congress has requested. Rep. Jim Jordan (R-OH), who serves on the House Oversight Committee, said he’s tired of the DOJ giving us the finger.

Over the last 10 months, we've caught the DOJ:

Just to name a few examples.

Enough is enough. People need to be held accountable.

In May, House conservatives reportedly drafted articles of impeachment against the deputy attorney general just in case things blew up. Well, now that the wheels have been set in motion, Speaker Paul Ryan voiced his opposition to the move, saying they should not be done in such a cavalier manner (via Politico):

.@SpeakerRyan says says the House shouldn't be "cavalier" w/ impeachment and that "I don’t think this rises to the level of high crimes and misdemeanors." https://t.co/XJMXXPJyW2

Speaker Paul Ryan on Thursday firmly rejected an effort by House conservatives to impeach Deputy Attorney General Rod Rosenstein, putting him at odds with hard-liners in his party and even some in his own leadership team.

The Wisconsin Republican told reporters the Department of Justice was largely complying with a GOP demand for documents surrounding the FBI’s Russia investigation.

“I don’t think we should be cavalier with this process or this term,” he said of impeachment. “I don’t think this rises to the level of high crimes and misdemeanors.”

That puts him in conflict with the no. 3 Republican, Majority Whip Steve Scalise, who expressed support for the idea in a Fox News interview earlier in the day. House Majority Leader Kevin McCarthy repeatedly refused to support or oppose impeachment when asked by reporters at the Capitol.

Yet, Rep. Mark Meadows (R-NC), leader of the House Freedom Caucus, said they could go around Speaker Ryan by bringing up the articles as a privileged motion; he made that known last night on Laura Ingraham’s show (via Washington Examiner):

“We hope that it doesn’t have to come to that,” Meadows told Fox News’ Laura Ingraham. “But, starting tomorrow, we can bring it up as a privileged motion. … That’s something that any member of Congress, Jim or I can do. And quite frankly, it’s either we hold him in contempt or we get the documents or we impeach him.”

Under Rosenstein’s leadership, the Justice Department has obstructed congressional oversight, Meadows said. "The stonewalling over this last year has been just as bad or worse than under the Obama administration.”

Yeah, I get why House conservatives are doing this to clinch a moral victory, but it’s a useless exercise. In principle, yes, the DOJ has been dragging its feet getting the documents requested to congressional investigators, but this easily could blow up in the GOP’s faces. Also, as Politiconoted, the impeachment articles would certainly fail to get the two-thirds majority in the Senate to remove Rosenstein. It’ll generate some noise, it’ll make some angry conservatives happy, but Rosenstein will remain the deputy attorney general. The conservative wing of the House acknowledged that today when they backed off their privileged motion route:

Meadows and Jordan passed up an opportunity to force a quick vote on impeachment by opting against pursuing a "privileged" resolution, a procedural tactic that allows members to demand a vote within two legislative days.

But as House lawmakers prepared to depart for a five-week recess, Meadows, Jordan and other conservative allies huddled with Scalise, House Judiciary Committee Chairman Bob Goodlatte and Ryan's legal counsel to discuss other measures that could get results while lawmakers are away in August. They also discussed the option of filing a resolution to hold Rosenstein in contempt of Congress, a step short of impeachment.