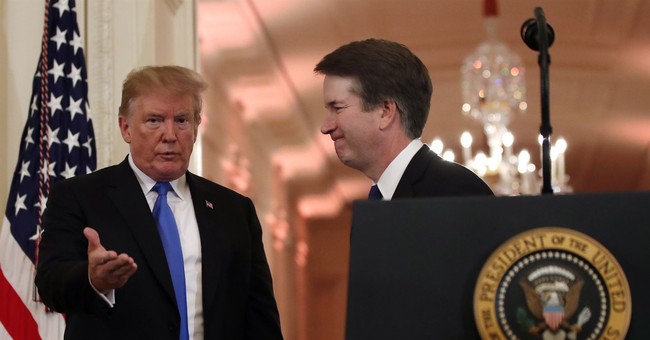 While the liberal bubble is unending in their outrage over Judge Brett Kavanaugh’s nomination to the Supreme Court, there are spots of calm, rational observation. And some times, these places are surprising. As liberals fret over whether the U.S. is becoming something out of The Handmaid’s Tale, The New York Times has an op-ed by one of Kavanaugh’s former law professors at Yale, Akhil Reed Amar, who says that this nomination is Trump’s finest hour. Oh, and did I mention he supported both Hillary Clinton and Barack Obama for president. Yes, and even still, he knows that Kavanaugh is a grade-A choice, with impeccable credentials and a legal acumen that is worthy of our nation’s most prestigious legal institution (via NYT):

The nomination of Judge Brett Kavanaugh to be the next Supreme Court justice is President Trump’s finest hour, his classiest move. Last week the president promised to select “someone with impeccable credentials, great intellect, unbiased judgment, and deep reverence for the laws and Constitution of the United States.” In picking Judge Kavanaugh, he has done just that.

In 2016, I strongly supported Hillary Clinton for president as well as President Barack Obama’s nominee for the Supreme Court, Judge Merrick Garland. But today, with the exception of the current justices and Judge Garland, it is hard to name anyone with judicial credentials as strong as those of Judge Kavanaugh. He sits on the United States Court of Appeals for the District of Columbia Circuit (the most influential circuit court) and commands wide and deep respect among scholars, lawyers and jurists.

Judge Kavanaugh, who is 53, has already helped decide hundreds of cases concerning a broad range of difficult issues. Good appellate judges faithfully follow the Supreme Court; great ones influence and help steer it. Several of Judge Kavanaugh’s most important ideas and arguments — such as his powerful defense of presidential authority to oversee federal bureaucrats and his skepticism about newfangled attacks on the property rights of criminal defendants — have found their way into Supreme Court opinions.

This studiousness is especially important for a jurist like Judge Kavanaugh, who prioritizes the Constitution’s original meaning. A judge who seeks merely to follow precedent can simply read previous judicial opinions. But an “originalist” judge — who also cares about what the Constitution meant when its words were ratified in 1788 or when amendments were enacted — cannot do all the historical and conceptual legwork on his or her own.

Judge Kavanaugh seems to appreciate this fact, whereas Justice Antonin Scalia, a fellow originalist, did not read enough history and was especially weak on the history of the Reconstruction amendments and the 20th-century amendments.

A great judge also admits and learns from past mistakes. Here, too, Judge Kavanaugh has already shown flashes of greatness, admirably confessing that some of the views he held 20 years ago as a young lawyer — including his crabbed understandings of the presidency when he was working for the Whitewater independent counsel, Kenneth Starr — were erroneous.

Professor Amar also noted that he’s aware of the fisticuffs that are to follow. Senate Democrats are mostly lock step in opposition to this nomination, and still sour over their 2016 loss and Senate Republicans’ refusal to give Judge Merrick Garland a hearing when the great Justice Antonin Scalia passed away two years ago. He suggests an act of good will on behalf of Democrats in exchange for Kavanaugh answering “fair questions at his confirmation hearing,” he said. But this is where this proposal goes off the hinges.

“Fair questions would include inquiries not just about Judge Kavanaugh’s past writings and activities but also about how he believes various past notable judicial cases (such as Roe v. Wade) should have been decided — and even about what his current legal views are on any issue, general or specific,” adds Amar.

I would suggest that this is not needed. We won the 2016 election. We control Congress, the presidency, and the direction of the courts. Elections have consequences. We don’t need to give an inch to Democrats and the GOP would be stupid to do so. For starters, they’re not to be trusted. Second, and more importantly, even if they wanted to act in good faith, their base wouldn’t allow it. They want congressional Democrats to become anti-Trump berserkers in opposing his agenda. With abortion, liberal’s favorite pastime, on the line—you bet they want to see a massive fight. This could be the biggest SCOTUS fight since Robert Bork. It could be nasty. Yet, if the GOP holds firm, and the moderate wing looks like they’re very comfortable with Trump’s pick, and we snag a couple of red state Democrats—the game is over. We may get a limited miniseries in liberal meltdowns, but after all their hollering, reality will set in: Kavanaugh will be confirmed. So, Democrats can make fools of themselves, and Kavanaugh can exercise his right to adhere to the long-standing Ginsburg Rule by not commenting on cases that may or may not come before the Supreme Court. In the meantime, former clerks and other legal analysts, touting his credentials, have flanked the D.C. Court of Appeals judge as he prepares for what could be a very nasty character assassination campaign spearheaded by sore loser Democrats. NBC’s Chuck Todd also said that Kavanaugh is a very confirmable pick. So, do we need some grand bargain on these hearings? I think not.