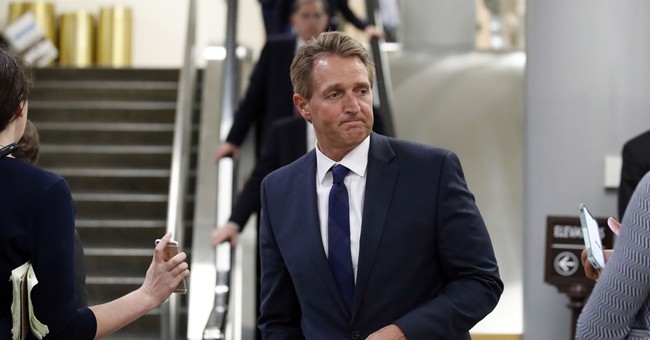 Well, we have one possible case of heartburn that won’t strike Senate Republicans.  Sen. Jeff Flake (R-AZ) said he wouldn’t block President Trump’s Supreme Court nominee over tariffs. Flake has threatened to become a force of obstruction on the Senate Judiciary Committee, threatening to hold up votes for lower court appointments over a possible brewing trade war over this policy. He’s the vote that gives the GOP the advantage on the committee—and he’s very much aware of that. Flake said on SCOTUS, however, he would not block the nominee last week (via AZ Central):

U.S. Sen. Jeff Flake said Wednesday he would not try to strong-arm the Trump administration on tariffs — or other issues — by withholding his support from a Supreme Court nominee.

The outgoing Arizona Republican and member of the Senate Judiciary Committee said he will evaluate the person nominated to replace the retiring Justice Anthony Kennedy separately. Flake's apparent cooperation would seemingly leave Senate Democrats still searching for at least one GOP ally to block a nomination to the high court sometime later this year.

Flake has recently stalled at least some federal appeals court nominations by withholding his support on the Judiciary Committee in an effort to pressure the Senate to vote on President Donald Trump's tariff changes, which Flake opposes.

We’re still not out of the woods yet, folks. We still have to worry about Sens. Murkowski (R-AK) and Collins (R-ME), who could derail the whole show. We’re at 50 Republicans right now; McCain’s absence already puts us in a very delicate position. If both women bolt, we’re dead—and it’s possible. What about red state Democrats? We’ll have to reassess until after President Trump selects his SCOTUS nominee on July 9. If Schumer really cracks the whip and keeps his people in line, we’ll see what happens. If anything, we’ll see how tight a grip he can hold on Senate Democrats compared to his predecessor, Harry Reid, who had an iron grip. The red state Democrats are in a tight spot. They could vote for the SCOTUS nominee and increase chances of re-election, but they’ll be left adrift by the national party and could get serious blowback from progressive groups. You think Trump officials being harassed in public is bad; wait until you see what they do to their own side. Sen. Joe Manchin (D-WV) has not hidden the fact that re-election is not his number one concern. He’ll run the best re-election campaign he can, but if the folks of West Virginia boot him, he’d happily go home. He’s the best shot for the GOP scooping up someone from across the aisle if there are defections. Senate Majority Leader Mitch McConnell has plans to get this nominee on the bench prior to the 2018 midterms.

The fireworks begin next week.