With No Guarantee Of A Wall, Trump Officials Quietly Plan Fresh Immigration Crackdowns 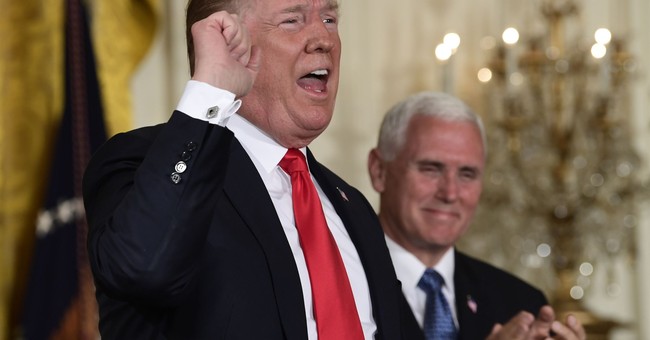 The immigration bills that are being mulled this week are not expected to pass. Both bills are not what hardliners on immigration want at all, though the Trump White House says they back both pieces of legislation. The Goodlatte Bill, named after House Judiciary Committee chairman Rep. Bob Goodlatte (R-VA), and the GOP leadership compromise bill, Border Security and Immigration Reform Act; both offer protection to DACA recipients.

Yet, Goodlatte’s legislation, also known as the Securing America’s Future Act, offers no pathways to citizenship, just a three-year renewable protection program. The leadership bill offers 1.8 million illegal aliens legal status for six years. On the sixth year, a new green card process for this pool of illegals. Goodlatte’s bill has no green card avenue. The differences can be read here.

The White House’ grim projections for these bills can be gleaned from the quiet meetings tops Trump officials are having concerning new immigration raids that will be executed right before the last leg of the 2018 midterm season. With no guarantee of a border wall, a key promise and plank of the Trump agenda, White House officials want to make it known to their base that they’re serious about immigration at least. Still, we’re almost halfway through the president’s first term and we still don’t have the funding for this project. This isn’t Obamacare, where the IRS code played a tedious role in charting a course for repeal, something that never fully materialized, despite nearly a decade of campaigning from the GOP on this issue. On immigration, it’s straightforward. There is no IRS genie to contend with; it’s just funding for a wall.

Still, regardless of these criticisms, the Trump White House has been a breathe of fresh air concerning immigration enforcement (via Politico):

Top aides to President Donald Trump are planning additional crackdowns on immigration before the November midterms, despite a growing backlash over the administration’s move to separate migrant children from parents at the border.

Senior policy adviser Stephen Miller and a team of officials from the Justice Department, Department of Labor, Department of Homeland Security, and the Office of Management and Budget have been quietly meeting for months to find ways to use executive authority and under-the-radar rule changes to strengthen hard-line U.S. immigration policies, according to interviews with half a dozen current and former administration officials and Republicans close to the White House.

The goal for Miller and his team is to arm Trump with enough data and statistics by early September to show voters that he fulfilled his immigration promises — even without a physical border wall or any other congressional measure, said one Republican close to the White House.

Among the fresh ideas being circulated: tightening rules on student visas and exchange programs; limiting visas for temporary agricultural workers; making it harder for legal immigrants who have applied for any welfare programs to obtain residency; and collecting biometric data from visitors from certain countries.

Why are we dealing with this before a critical midterm election? Well, we can thank the moderate GOP, who allied themselves with the Democrats in this discharge petition nonsense that would allowed immigration votes without the blessing of GOP leadership to occur if they gather 218 signatories; they were three away before this deal was struck. In the meantime, the Trump White House is dealing with families of illegal aliens being separated upon arrest, something that can be easily remedied: don’t come here illegally and don’t bing your kids with you. But, alas, here we are and Sen. Ted Cruz is pushing emergency legislation to keep illegal alien families together, the liberal media from having conniption fits, and double the number of immigration judges to process these illegal aliens more efficiently.

“Repeatedly, I have visited detention facilities tragically housing young children.  For far too long, children have been the greatest victims of our broken immigration system, with tens of thousands of children who were detained under the Obama Administration and continuing through today, and with far too many of those children facing horrific physical or sexual assault from criminal human traffickers,” said Cruz in a statement. “The answer is not what congressional Democrats are proposing: simply releasing illegal aliens and returning to the failed policy of ‘catch and release.’ Rather, we should fix the backlog in immigration cases, remove the legal barriers to swift processing, and resolve asylum cases on an expedited basis,” he added.

Cruz hopes Democrats will support his bill that could address this issue this week.

Double the number of federal immigration judges, from roughly 375 to 750.

Authorize new temporary shelters, with accommodations to keep families together.

Mandate that illegal immigrant families must be kept together, absent aggravated criminal conduct or threat of harm to the children.

Provide for expedited processing and review of asylum cases, so that—within 14 days—those who meet the legal standards will be granted asylum, and those who do not will be immediately returned to their home countries.