New Jersey To Gun Owners: Hand Over Those Magazines Or We Could Throw You In Jail 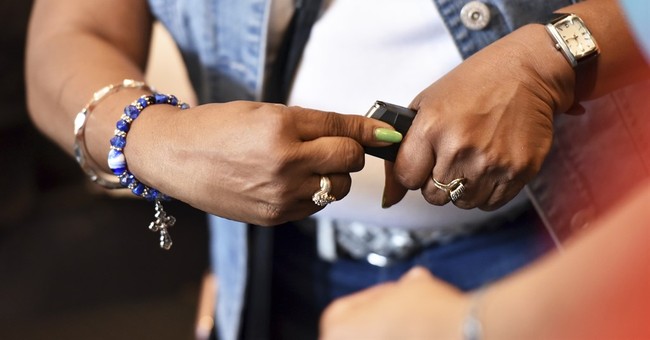 If you don’t submit to our so-called common sense gun control policy, we’ll throw you in jail. That’s the mindset of New Jersey. With new anti-gun Governor Phil Murphy helming the ship there, you knew things would be terrible; he’s a Democrat. Beth laid out the details for this law, but the crux of it is that if you don’t turn over so-called high capacity magazines, those that hold more than ten-rounds, the state could throw you in hail for up to 18 months (via Free Beacon):

The law, signed by Gov. Phil Murphy on Wednesday along with five other new gun laws, gives New Jersey gun owners who currently possess ammunition magazines exactly 180 days to either surrender their ammunition magazines, permanently modify them to only accept up to 10 rounds, or transfer them to somebody who is allowed to legally own it such as those living in most other parts of the United States.

If someone in New Jersey is caught with a magazine capable of holding more than 10 rounds after the deadline is passed, it will be considered a crime of the fourth degree which carries up to 18 months in prison and up to $10,000 in fines or both.

Nearly all full-size and compact handguns as well as many rifles come standard with ammunition magazines capable of holding more than 10 rounds.

The Association of New Jersey Rifle & Pistol Clubs said it acted immediately to try and block the law because it could turn a million New Jersey gun owners into criminals.

"This unconstitutional law will be ignored by criminals and madmen, and affects only law-abiding citizens," Scott Bach, the group's executive director, said in a statement. "It turns one million people into criminals with the stroke of a pen, limits self-defense, and takes away property lawfully acquired. Buy it yesterday, ban it today, go to prison tomorrow—it's the Jersey way, and the goal of our lawsuit is to boot this law, which makes no one safer, into the trash heap of history where it belongs."

Yes, there are legal challenges to the law, but again, this is what happens when you give the anti-gun Left an inch—they take several thousand miles. And I don’t blame them. When the courts are silent, you should go as far as you can. On assault weapons bans, the Supreme Court’s refusal to hear argumentson their constitutionality gave room for Deerfield, Illinois to ban AR-15s and other so-called assault weapons within the village limits; Deerfield is a Chicago suburb. Oregon could have a ballot initiative where AR-15 owners have to transfer them out of the state, destroy them, register them, or surrender them to police. Boulder, Colorado also recently passed an assault weapons and high capacity magazine ban as well. They’re on the move, folks.

In states with GOP governors, like Vermont and Florida, they both passed laws boosting the age to purchase to 21 for all firearms. It’s seeping into our areas. This cannot be ignored.

NRA-ILA Executive Director Chris Cox said, “Magazine bans do not deter criminals or improve public safety. Instead, they irrationally burden the rights of law-abiding gun owners. The National Rifle Association is proud to assist the Association of New Jersey Rifle and Pistol Clubs in this legal challenge.”

These are law-abiding gun owners, folks. Criminals weren’t going to abide by this law. They don’t abide by any gun laws. This is the only class of people in the country who are demonized and viewed with suspicion for exercising their constitutional rights. And they’re certainly blamed for mass shootings because the anti-gun Left is, and always will be, a group of badgering, self-righteous thugs who push crappy policies—all of which are mandatory. Their goal is not to respect your rights; the goal is to break you to the will of the state. In their eyes, true social justice can only be achieved if everyone is under their boot. In New Jersey, that day has arrived.