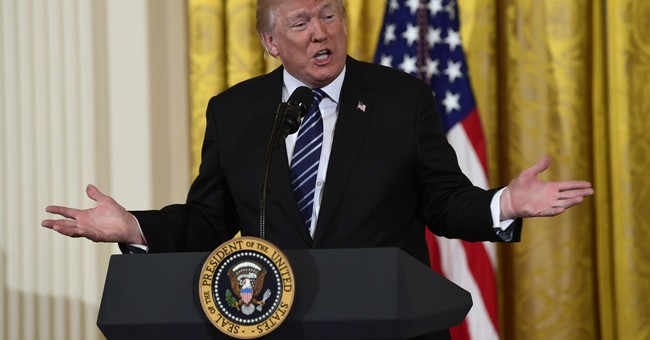 Wait—so, disgraced Deputy FBI Director Andrew McCabe not only lied to investigators multiple times about unauthorized media leaks, he also discussed the infamous Trump dossier with CNN? The funny thing is the reason then-FBI Director James Comey said he briefed the president on the dossier, which was an opposition research project funded by the Democrats and the Hillary Clinton campaign, is that CNN had it. In a series of emails obtained by Sen. Ron Johnson (R-WI), chair of the Senate Homeland Security Committee, it shows top FBI officials were in contact with the news organizations about the dossier.

McCabe is seen writing, “a flood is coming.” All of this on top of the allegation that the FBI had someone spying on the Trump campaign. Comey said prior to the briefing that CNN was angling for a “news hook.” Well, what better way to unleash the Russian collusion hysteria than the top domestic law enforcement and intelligence chief briefing the incoming president about a document that’s one of the centerpieces of this shoddy theory. Just a friendly reminder, there is zero evidence that the Kremlin colluded with the Trump team to tilt an election. Zero.

Sen. Johnson wants answers from the FBI. Sean Davis at The Federalist has more:

Comey briefed POTUS on the Dossier so that CNN could get a spicy hook & hype collusion narrative. It was all a lie. Always a setup. An Info op run by Obama loyalists at DOJ, FBI, & rest of IC.

Senator Ron Johnson letter to the FBI regarding Steele dossier. Explosive new e-mails show FBI brass discussed dossier briefing details with CNN. FBI has a hell of a lot of explaining to do. https://t.co/sOlD7gkiHz pic.twitter.com/cUExt5GmgS

Newly revealed e-mails show that former Federal Bureau Investigation (FBI) deputy director Andrew McCabe was keenly aware of CNN’s internal understanding of a secret briefing about the infamous Steele dossier, days before CNN published any stories on the matter. The e-mails, which were obtained by Sen. Ron Johnson (R-Wisc.), also reveal that top officials used coded language to refer to the salacious and unverified allegations made by Steele.

Former FBI director James Comey briefed then-President-Elect Donald Trump on January 6, 2017, on at least one unproven allegation contained in Steele’s dossier, which was jointly funded by the Hillary Clinton campaign and the Democratic National Committee. CNN broke the story about the dossier briefing on January 10, 2017, touching off a firestorm of hysteria that culminated in not just the firing of Comey by Trump, but the eventual appointment of Department of Justice (DOJ) special counsel Robert Mueller.

Comey claimed that he was compelled to brief Trump on the dossier because “CNN had [it]” and was “looking for a news hook.”

Hours before Comey briefed Trump, FBI chief of staff James Rybicki e-mailed staff that Comey “is coming into HQ briefly now for an update from the sensitive matter team.” Just as the same officials dubbed the Clinton e-mail investigation the “mid-year exam” and the anti-Trump counterintelligence investigation “Crossfire Hurricane,” they also used various phrases using “sensitive” to refer obliquely to the dossier.

Two days after the briefing, on January 8, 2017, former FBI deputy director Andrew McCabe, who earlier this year was fired and then referred for criminal prosecution by the DOJ inspector general for repeatedly lying about media leaks, wrote an e-mail to top FBI officials with the subject, “Flood is coming.”

In a Monday letter to FBI director Christopher Wray, Sen. Johnson…asked the director to provide a list of all members of the “sensitive matters team” referenced by Rybicki in his January 6 e-mail. Johnson also requested that Wray provide all details about how FBI officials “first learned that media outlets, including CNN, may have possessed the Steele dossier.”

On the day CNN reported on the dossier, January 10, Davis added that McCabe emailed acting Deputy Attorney General Sally Yates saying, ““Just as an FYI, and as expected...it seems CNN is close to running a story about the sensitive reporting.”

“It is not clear how McCabe came to be so familiar with CNN’s understanding of the dossier, its briefing, or how close CNN was to reporting on the matter,” wrote Davis. he also added another odd email between McCabe, Comey, and Rybicki, in which McCabe seems to know the “trigger” of the CNN story, which was the fact that Comey and Trump had discussed this document.

“CNN is close to going forward with the sensitive story…the trigger for them is they know the material was discussed in the brief and presented in an attachment,” wrote McCabe. Davis added there’s no detail concerning how McCabe knew that CNN’s trigger was for this story.

Maybe all of this can be explained when the FBI responds to Sen. Johnson’s letter. Or maybe they will drag their feet, as they’ve done with troves of documents relating to the Trump-Russia saga that’s been requested by Congress.

First, let’s rehash the demise if Mr. McCabe. He was fired hours before he was set to collect a multi-million dollar pension. Tension brewed between the FBI and DOJ over the Clinton Foundation probe. The Wall Street Journal reported that in October of 2016. It also included that McCabe's wife, Jill, who ran for Virginia Senate in 2015, received over $400,000 in campaign contributions from then-Virginia Governor Terry McAuliffe’s PAC in July of that year. A few things happened during and after that election: a) McCabe was promoted to deputy director; and b) the FBI announced they were investigating Hillary Clinton for possibly mishandling classified information, an investigation McCabe oversaw. McAuliffe is a close ally of the Clintons. In fact, you could say his one major job, as governor was to ensure Virginia went for Hillary; it did.

It would look as if McCabe’s family received a down payment for political protection, hence why it appears he leaked that he didn’t want to fully shut down the Clinton Foundation probe, trying to paint the DOJ in a bad light for wanting to, for lack of a better term, move on from the investigation.

When an investigation was launched into the leak, he lied to investigators, who then wasted countless hours and manpower trying to find a mole, which was McCabe the whole time. Given the history of lies and deceit McCabe had executed during the leak investigation, which was started by then-FBI Director James Comey, the Office Of Professional Responsibility, FBI’s IAB, recommended that he be fired. The DOJ inspector general’sreport torched his conduct as well. For the anti-Trumpers out there, the DOJ IG, Michael Horowitz is an Obama appointee. The DOJ internally concluded that McCabe needed to go. McCabe tried to skate by with some dough, however, he had planned on resigning in March of 2018, stepping down in January on so-called “terminal leave,”where you step down, but stay on the payroll until your retirement date. There was also an allegation that he used his FBI email in support of his wife’s state senate bid, which is a Hatch Act violation, but this is a much bigger. The lying to investigators is much of a bigger deal. Even CNN thought his axing was warranted. A bit ironic since they both parties were something of temporary pen pals on this dossier business. Recently, Inspector General Horwitz referred his findings to federal prosecutors for possible criminal charges.

Yeah, things are going real swell at the FBI. There have been accusations that the bureau spied on the presidential campaign of an opposing candidate and possible collusion with CNN on the dossier before they published their story on it. All of this done in what appears to hamstring the incoming administration. That's what it looks like, folks.

Editor's Note: This post has been updated, some parts of McCabe's timeline were mixed up. Apologies, folks