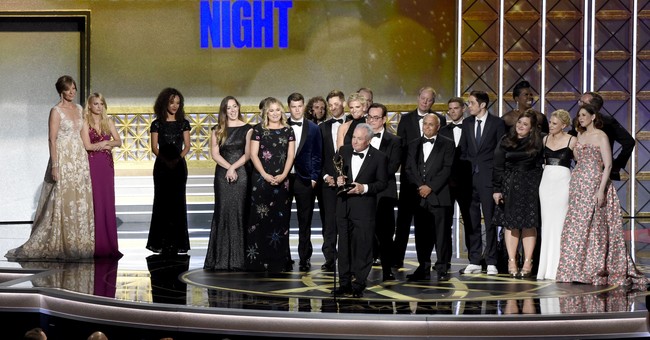 Call this why Trump won part LIV, and the fact that it’s coming from a left-of-center outlet means that it’s not just conservatives who view the elite media’s explicit anti-Trump bias. In fact, they agree; it’s only going to help Donald Trump win a second term. Harry Cheadle, the west coast editor for the news site, was blunt, torching the iconic comedy sketch show for having cold openings that are intellectually barren, “cringe worthy,” and wholly unfunny. It only reinforces the Trump base to stick with their guy, and drive more into that camp and stay there. As former SNL cast mate said in Cheadle’s’ op-ed, the “cat is out of the bag” on the bias of this show which has devolved into total garbage. Cheadle fillets the writing, how it’s loaded with cheap shots at the administration, and skips topics that could potentially, in his opinion, make for humorous material:

SNL, I come as a friend: Your cold opens are terrible, cringeworthy pieces of self-satisfied liberal propaganda that are sometimes so bad they seem like parodies of themselves.

Even if you avoid SNL you probably hear about these cold opens, which are consistently politically themed—though "themed" may be too strong a word because they are mostly just recaps of the political news of the week performed by A-list celebrities. Thanks to star power, these sketches inevitably draw headlines, and last weekend's affair (featuring Ben Stiller as Michael Cohen, Scarlet Johansson as Ivanka Trump, and Jimmy Fallon as Jared Kushner) was no exception. And honestly, if you're a fan of Very Famous People Appearing Together on Screen (a very successful genre, if the Avengers franchise is any indication), you'll get your money's worth. Look, Robert de Niro and Stiller are doing a Robert Mueller–themed reprise of a scene from Meet the Parents! Look, they got the real Stormy Daniels to play herself and deliver wooden #Resistance-worthy lines to Alec Baldwin's Donald Trump!

But beyond that novelty, the jokes are tired references to current events that never build on one another. Instead, they are limply tossed out as obvious applause lines to an anti-Trump crowd. Here's how the last cold open ended, with a phone call between Trump and Daniels:

TRUMP: Just tell me, what do you need for all this to go away?

STORMY: Sorry Donald, it's too late for that. I know you don't believe in climate change, but a storm's a-coming baby. [Applause]

It's not surprising or even all that notable that SNL would go hard after Trump—the show has parodied every president, some more aggressively than others, since the 70s. But the show has shifted to the point where its politics are indistinguishable from the Democratic Party's. After the 2016 election, the show gave Hillary Clinton a worshipful send-off, with Kate McKinnon's Hillary singing a topical version of "Hallelujah" before telling the camera, "I'm not giving up, and neither should you." It was a powerful moment if you were a Clinton fan, but as Schneider said, the cat was out of the bag.

At best, the cold opens just echo the same beats and jokes as all those other programs (every good liberal recycles material). At worst, these sketches just coddle the audience by reflecting all of their assumptions and prejudices back at them: Yes, Trump is dumb, his administration is full of venal lackeys, Jeff Sessions is creepy, Cohen is a crook, all of your obvious, knee-jerk impulses and prejudices are correct. It's not just playing to the crowd, it's spoon-feeding the audience their own spit-up. It's Studio 60 on the Sunset Strip come to life. It's exactly the kind of smug, smarmy bulls**t that makes conservatives angry enough at the Hollywood elite to vote Trump just to stick it to them.

Cheadle doesn’t come off as a Trump fan, but he offers a rather brutal look at a show, whether we like it or not, that potentially has the cultural pull to shape more than a few things given the size of its audience. It’s the reason why conservatives should continue to watch these shows. It should make our blood boil, but we know what the enemy is thinking. We know what they’re crying about in order for us to plan our next move. To fight the cultural battles, we must insert ourselves into the muck, the rancid cesspool of American progressivism in order to defeat it. Right now, he feels, and I’m sure he’s not alone, that SNL is blowing it. That’s fine.

Let them hate us. Let them come to full froth. They’re only making us stronger and unlike the Democratic Party’s mantra of more government, higher taxes, safe spaces, calling everything racist, and fewer people controlling how that expanded power is exercised to bring about social justice because we’re all poor plebes, is just not popular. Cheadle nails SNL as of late; “It's a toxic example of limousine liberalism, millionaires putting on a self-congratulatory show with jokes cribbed from the New York Times editorial page.”

There’s also another factor: Donald Trump. He’s a master of using the media to accomplish his aims. He was able to milk $2 billion in free media from the news media in 2016. If he wants to fight fire with fire, he could. He’s already made the news media looks like idiots with his 2016 win over Hillary. He’s able to force the Left to defend their unpopular cultural positions, like kneeling for the national anthem. It’s a slow humiliation, a tar-and-feathering in slow motion, but he’ll win. The National Football League is suffering CTE from his drumming of players that disrespected the flag and national anthem, which then forced the owners into a linguistic Olympics.

Keep hating us Democrats, we’ll still be here laughing as you feed the country your vomit to the rest of liberal America—all while seeing Trump cruise to re-election.